DAZLR uses the Zamor sphere launchers from the new(er) LEGO Piraka sets, and I was asked how I attach & power them. A Zamor sphere (the gold ball) sits in a three-fingered cup, and an 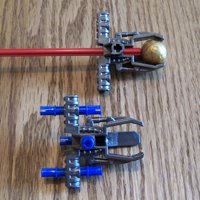 axle (red) pushes it from behind. The bottom finger is flat, but the side fingers have a slightly in-turned tip, making the opening just slightly smaller than the sphere. As the sphere is shoved forward, the side arms are forced out, until the sphere is squeezed between the fingers. The stressed plastic arms then push on the curved rear of the sphere, launching it forward at about 4.9 m/s (the range, at 45°, is around 2.4 m). The NXT motors are powerful enough to directly drive an axle like a piston to push spheres out of the launcher; the problem then becomes in how to secure the launcher to the motor! In the 2nd launcher the mounting points are all shown by blue axle pins for reference.

Simply pinning the launcher to a beam doesn’t work: the problem is that as the drive axle pushes forward, it pushes the entire launcher forward, away from anything it might be attached to behind it... and those NXT motors have some torque! The middle-top attachment point would be good, but it is difficult to use without interfering with balls feeding in from the top. So what to do? 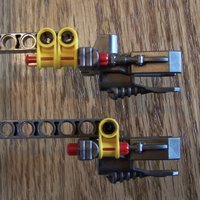 Here are two solutions that you might try at first (These are side-views. I’ve used slightly too-long red axles here for clarity, but the driving axle is not shown; if shown, it would be parallel to the other red axles in the images). In the top case, the forces would slide the launcher forward on the red axle, right off the structure. The second would seem better: because that yellow cross-block is in front of the launcher where it attaches, the launcher can’t just slide forward, and the friction pin holding the cross-block to the beam could only come out if pulled sideways. But if you try this a new problems crops up, as the force pushing on the launcher tends to tip or rotate the attachment around the friction pin, usually bending (!) the driving axle. The force required to launch the spheres is more than enough to warp or rip apart a lot of structures. 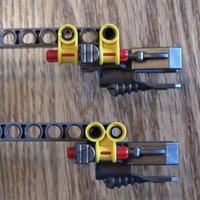 Here are some better ways to secure it. If I can lock the red axle into place both ahead & behind, or just ahead but with a piece that doesn't permit rotation, I’ve solved both problems. In practice, actually, the lower solution is still not stiff enough, and the structure tends to bend and bind up on the driving axle. There is a lot of force in launching the spheres! Now all I need to do is secure this to a motor, add a “piston” of an axle, and let the spheres fly!

The final image is a step from the assembly of DAZLR, showing one side of the dual launcher assembled, and the other side partially disassembled. Can you see how I attached the launchers (it's slightly different here than the examples)? And how the “pistons” work? Two challenges: can you understand why the two launchers should alternate? 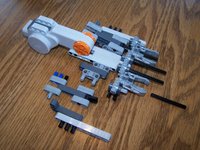 And for bonus points, which way does the motor in this picture turn, and why? Yes, there’s a “best way” to turn the motor here…

Anonymous said…
Can I take a guess about the answers to the challenges?

I would guess that the reason the launchers should alternate is so that the motor (and the whole Lego structure) won't undergo to much stress at once.

My guess about the other challenge is this:
The motor should turn counterclockwise. This way, the force the motor exerts on the axle to launch the ball will be more direct (directly from behind instead of from above).

Brian Davis said…
Yep, and yep :-). Although the stresses on the structure aren't critical (it will handle them), by alternate launching the motor is under a more constant load. By turning counterclockwise, when tyhe piston has to deliver maximum push it is also properly positioned to make best use of the motor torque. Good job!

Also, when I actually programmed DAZLR, alternate launching gave the possibility of having it fire only a single shot if desired, simply by advancing the lauching motor by 90°

As to the accuracy of the motor encoders... remarkably good. They do not seem to have the same problem as the old rotation sensor. I've done things like cycled them at full power, (as well as reduced power), between +/- 90°, or even +/-1°, for a couple hundred cycles... and the motor ends at the same place it starts from. *Even* if you try to mess it up (say, by grabbing the output shaft and physically stopping it, or even turning it in the wrong direction while under load... yeah, I'm cruel to my hardware).

Anonymous said…
I don't tend to buy bionicle. I find the pieces to be very specific and not at all universal like System or Technic.

Eien said…
I've been trying to make a copy of the dazlr ever since i saw it on your MDP page. But didn't see the inside until now so my driving axles kept bending so now I'll have to try again and buy some new parts. I'm still not sure why this fixes the drive axle from bending but I'll try it.
May 6, 2007, 10:16:00 AM