For my first post I was going to put up photos of the inside of my NXT brick. Just two minor things stopped me:

1. I only have a picture of the top side of the circuit board, as I have not yet persuaded the battery terminals to become disconnected. (I guess I need a bigger bit for my soldering iron, and some extra hands to help pull when the solder is melted.)

2. Jürgen Stuber has just beaten me to it - http://www.jstuber.net/lego/nxt-programming/nxt-hardware.html

That I have disassembled my NXT so quickly will tell you something about me, for good or ill. In mitigation I must point out that the software arrived a day later than the hardware, and the temptation was great.

I shell visit the NXT internals later, but for now here is some info I have not seen covered elsewhere...

This is the rechargeable battery in the NXT Educational kit: 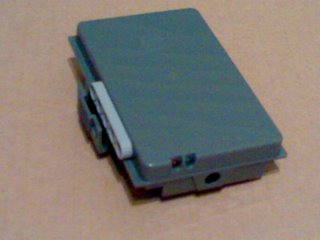 Notice the light grey half width studless beam balanced on the lip of the battery; illustrating that the battery protrudes the whole height of the beam from the back of the NXT brick.
The battery can be recharged whilst installed in the NXT, unless it is completely discharged.
The green LED illuminates when the transformer is connected, and the red LED whilst the battery is charging. 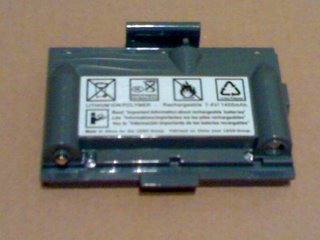 The postive and negative terminals of the battery pack are at the bottom corners of this second picture.
Just inside these you can see two silver dots - some of the blind rivets keeping the housing sealed.
To the top, just before the clip that holds the battery pack inside the NXT, is a plastic pin that operates a button inside the NXT. Presumably the switch simply indicates that a rechargeable battery is fitted - perhaps in order to limit the power level to the motors? 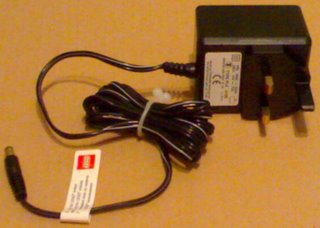 This is the UK charger, notice the only identification or label on the charger brick is on the side facing the wall. It does not even mention Lego, but has safety test symbols and describes the output as 10V ac 7VA.
There is a Lego sticker on the wire, but that seems likely to be lost quite quickly in a classroom.
The other side of the sticker has symbols warning against connection to mobile phones, tape players and radios.
The printed instructions very strongly say not to use a non-Lego charger.

Anonymous said…
Thank you for posting the photo of the charger. We have been waiting a long time for more detail of this. A few questions,

Can you post photo of charger in the brick?

Can you post detail about gears and any other parts that are different than the store version?

Is the box and book different than store version?

The set contents are quite different.

I have submitted an inventory to Peeron here:
http://www.peeron.com/inv/sets/9797-1

My first inventory, so there may be errors. Also the list is of Lego parts and does not include the plastic storage box - you can see the box on Lego's Educational site:
http://www.legoeducation.com/store/detail.aspx?by=6&pl=10&ID=1263&bhcp=1

Which you can compare to Philo's inventory of the store kit here:
http://www.peeron.com/inv/sets/8527-1

Give me a chance, I have barely got the kit unwrapped!

Although the motors are DC they are driven with a stream of variable width pulses. So for the first approx three quarters of the power range I would expect the power to be similar. (The built-in NXT rotation sensor and motor control micro should help with this too!)

Then the lower voltage and lower current will take away the high speeds.

Philo has experimented with NiMH AA cells driving a single motor. There is a nice graph comparing NXT motor performance with different cells on his site here:
http://www.philohome.com/nxtmotor/nxtmotor.htm

I expect Philo's array of 7.2V cells and the 7.4V battery to be quite similar.

Christopher R. Smith (Littlehorn) said…
Does anyone dare to mention that the Train Themed transformer (AC Adapter) is exactly the same as the NXT transformer? I will compare and varify. Yep! So, if you have one already you don't need to buy another one! Save and buy another battery pack!

Christopher R. Smith (Littlehorn) said…
Ooops! Due to the usage of one item number for the transformers over time, the new NXT transformer has been crossed with some even older transformers. So, there are some differences I will attempt to explain in my next posting. Until I correctly state the differences, please use the newest "NXT" transformer as the proper A/C power adapter for charging the NXT Rechargable Battery. On the exterior of the adapter is written "ON TOP" and states "10.8 volts" as the output.

Unknown said…
Hi, can someone please answer simple question for me?

I moved from US to Europe and cannot use my US LEGO charger anymore. It is only rated 120V, so a simple adapter will not work, right?

I have a universal charger that I use for other purposes, which seems to fit. Now I understand that the instruction say to only use a LEGO charger. What am I risking by using this universal charger?

The adapter plug fits the battery pack plug, I just need to know whether to to set positive to be on the outside or inside of the plug.

P.S. when I try charging the battery pack with the universal adapter, the red light comes on for a second, then starts flashing :)

Unknown said…
hello
can we charge the battery when she has installed in the robot, without stop the robot and the program running ?
Nov 21, 2010, 3:36:00 AM