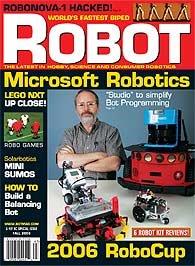 It hasn't hit the shelves yet, but I was invited to write an article on the NXT for ROBOT magazine issue #4. I cover the retail version and a bot I built that used all the sensors, motors, and as many parts as I could throw at it... ran out of the small black connectors, Hassenpins, all the white beams, and a few other parts.

The editor, Tom Atwood, also managed to get a good interview with Microsoft regarding its new Robotics Studio that is featured in the issue.

Very neat trick, getting in to print just ahead of all the NXT reviews in August!

One review I've spotted already is positive, but highlights some aspects the reviewer found difficult:
http://www.mobilemag.com/content/100/335/C8898/