From NI Week to BrickFest

Well, I need to apologize. It's been a busy time (school starting etc.), and I've not had time to blog as I should... and the schedule's just ramping up! But a few quick notes on NI Week, and a mention of BrickFest.

First, NI Week had at least two other things that

really need to be mentioned and hit on much harder than I did. National Instruments announced their Toolkit for the NXT, a way of programming the NXT in LabVIEW. Not only does this open up some amazing power for you LabVIEW folks, but it also lets you author your own blocks for incorperation into NXT-G. To say I'm excited about this is an understatement - essentially, the development team at NI is releasing a toolkit very similar in many regards to the one they used to develop NXT-G in the first place! There are a few of us that will be beta testing this, and I look forward to all the neat stuff I can start learning "under the hood". More details as I learn (and a quick footnote: anybody have suggestions on how to get up to speed ASAP in LabVIEW 7?).

Also, I've yet to mention Dick Market's demo of RobotC and all the fun toys (in some cases literally) he showed off. RobotC is looking like it will be a very nice, powerfull language (alas, I've not used it yet, due 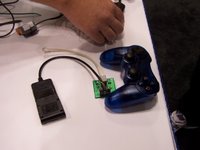 to being on a Mac and time constraints). Filip & Dick have posted a nice write-up over on bNXT, and if you've not looked it over I encourage you to do so. It has a lot of the features I liked in the RCX firmware, such as preemptive multi-tasking, events, arrays, and a bunch of new goodies like floating point... and speed! The hardware Dick brought was equally interesting (including a remote control that is slightly more professional looking than mine... see the picture. And a tiny camera with on-board processing). Thanks Dick, and I'm looking forward to learning yet another wonderful language for the NXT.

Sidenote: pause for a moment and think of just how much stuff is out there for the NXT... not yet a month after the official release date. NXT-G, Robolab, RobotC, NBC, Java on the way, MS Studio, etc., etc... and many custom sensors already either released or close at hand from HiTechnic, Vernier, Mindsensors, etc. Let's see, where was the hobby community a month after the RCX release... Wonderful stuff. Thank you to LEGO, NI, 3rd party developers... and especially the community!

Tommorow starts BrickFest 2006, a LEGO Fan convention in Washington D.C., and that's where I'll be headed tommorow. So while I won't be posting, I will be taking lots of notes. A fair number of the MDP are going to be there, and we'll likely have the largest collection of NXT's in one place outside of perhaps some schools (can you say, "BlueTooth"?). Line following, remote control, Zamor guns blasting the spectators... I'll take pictures. And if you live in the area, drop on by: BrickFest will have a public expo Saturday and Sunday. and I promise some new things will be revealed...

David Levy said…
I would love to meet the fellow NXT-STEP bloggers as I live 20 minutes out of DC. However, given that this weekend is my 10 year wedding anniversary, it may not go over too well if I spend it at a Lego convention :)

Anonymous said…
Hey, Brian -- just wanted to say thanks for your kind words on NIWeek and our challenge. I, for one, certainly had fun putting it on. :)

Hope you have lots of fun.