A little while back Lego Mindstorms Education announced some accessories and pricing for the Education NXT kit. (See here.)

Two weeks ago I received the LME NXT Resource Kit (item #979648 in the LME announcement. I have made an inventory of the kit but as I have not yet persuaded Peeron that the kit exists, it is difficult to share.

However I can tell you it has most (if not all) of the parts that are in the retail NXT and not in the Education one. Such as 8 of the corner pieces with pins at right angles. Mentioned previously in the Blog here as 'Hassenpins', after Steve Hassenplug. (Steve reported has fight to get such a part added to the kit to the February edition of Wired magazine, see p150.)

There are mundane and interesting Technic parts the Resource kit, such as smaller tyres that fit the NXT wheels. Also tank/tractor treads that engage with the blades on the outside of the wheels too. (The treads are the same as the Mobile Defense Tank, Lego item #7706, which has black coloured NXT wheels).

The big surprise in the kit is this little missile and spring launcher: 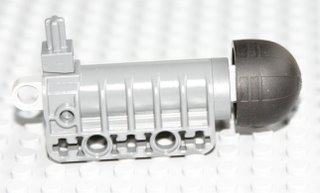 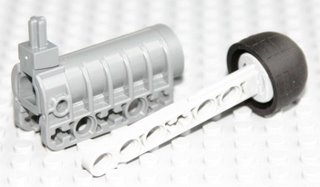 Anonymous said…
WOW! What amazing parts!
Hope I can get this resource kit ASAP.
Is there anyone can help me to point out what's the difference between retail and education NXT parts?(571 vs 400+ pieces)
My friend got LME, but he said he can not build the robot of retail version (the scorpion?) for the reason of lacking parts.
Thank you and forgiven my broken English! ^_^
Aug 31, 2006, 12:03:00 PM

Anonymous said…
What is the problem with informing Peeron that the Resource kit exists? It has been on their website (with picture) for many months!
Aug 31, 2006, 1:32:00 PM

Hunter - the Education NXT has a nice plastic box for classroom storage. You can see the inventories at www.peeron.com and search for NXT. Or click these links:
retail NXT kit or Education NXT kit.

All the basic class projects with Education NXT are built around the basic three wheel "tri-bot". (So that the robot does need a complete rebuild for each class.) The NXT Education Resource Kit seems to allow the scorpion and the other robots to be built.

I emailed the #9648 inventory to Peeron about 10 days ago. Also some minor corrections to the NXT base sets. I posted the details here: http://news.lugnet.com/inv/?n=220

Matthias - Yes, there is a spring inside. I think, if you look at the big version of the second picture, you can see the notches in the liftarm part of the missile that hold it in the launcher.

Pulling the lever at the back of the launcher backwards a little releases the spring, and missile. Range is about 2m on a level surface, and about 4m inclned at 45 degrees. The black rubber nose is quite soft.

Anonymous said…
I got this gun piece with the Star Wars Slave One model. It's surprisingly powerful. I only just got the NXT and hadn't seen the opportunity to combine them. Robotank here I come!
Aug 31, 2006, 10:15:00 PM

Rick Rhodes said…
I had to get my LME Kit from Britain, as all US outlets I could find were sold out (including the US LEGO store).

Does anyone know of US stores that have the kit in stock? (LEGO sent me a noncommittal email about when the kits would again be available through them).
Sep 1, 2006, 1:11:00 AM

In my previous post, I was referring to the LME Resource Kit (i.e, the parts kit and not the kit with the brick).

However, we are lacking the building instructions for the cool designs in the retail kit (Spike, RoboArm, etc.) Does anyone know if these instructions are posted anywhere on the net?
Sep 1, 2006, 3:25:00 AM

Anonymous said…
Those instructions come with the retail version software and are probably the property of Lego. If someone were to redo the instructions in MLCAD or other they'd probably get in trouble with Lego or maybe not. I'd like the tutorials and stuff that comes with the ed version, but I bought the retail kit. Them's the breaks.
Sep 1, 2006, 3:31:00 AM

Anonymous said…
I have two of them and they are a little dificult to shoot with a motor. Because of the way the "triger" on te top must be moved, regular gears have some trouble with it.
Sep 1, 2006, 6:17:00 AM

Peeron has discovered the NXT Resource Kit now, and I hope my inventory will appear here in the next day or two.

Thanks for the help identifying the weaponry. I had not seen the parts before and had not found them Peeron or Lugnet.

Regarding the retail kit models, maybe if Lego Education are listening they can suggest putting them on the official Mindstorms web pages?

cmsnxt said…
I just built a small atachement with this cannon on it . The attachement can be hooked up to any robot and can be shot by programing the robot or manualy . It can shoot up to 3 feet or you can about 38 inches .
Sep 1, 2006, 4:41:00 PM

Tony Naggs said…
I think the NXT Resource Kit will be quite popular with people who have the retail NXT kit: it has a great collection of parts for building bigger projects.

The picture inventory is now available at Peeron for you to browse. Only the treads do not have a picture at the moment - they are quite similar to the treads on the RCX kit.

Spectere said…
There are versions of the building instructions for the retail kits on Lego's web site. Here is the main link: