Well it’s been too long since NI Week, and I really wanted to update some folks on what went on there, so I’ll start (out of order) with a contest and a ‘bot. One of the things that NI (National Instruments, the folks that

developed NXT-G) set up for us was a challenge: to navigate around an obstacle course as quickly as possible. Easy enough, but there were a few constraints. First, we had only one hour to program, and second, the obstacles were devilish! A simple ramp (recognize anything?) with a “snake pit” of cables next to it, a giant teeter-totter, even a section of “washboards” to try to drive over or through – the variety and design were great!

the developer of Robolab), and others, including a team of high school students that took 1st in a local FIRST event. After much rushing around and rapid testing (not to mention badgering, teasing, and intimidating), Steve and I hit upon the highly technical solution of “dead reckoning”, without looking for any of the landmarks. You might picture how well this did over the rough terrain, but it still held the promise of being the fastest (it didn’t matter how many times you failed, just what your fastest run was). And at the end of the hour… we lost. To the group of high school students, who also relied on dead reckoning. Watching the NXTbots run up the teeter-totter, only to slam back down on the far side was great (Spike was even at one corner, striking at all in his range), and everyone, participants and spectators, had a wonderful time.

interesting constraint was the NXTbot itself. To save time and level the playing field (the following day, anybody at NI Week could try the same challenge), all of us were given the same NXTbot. This was designed and built by Laura Hayden & James Loftus, and was really a nice design (it can be built with one kit). It used the blue ball as a front caster (great for traversing rough terrain) with small side wheels to help keep it from becoming snared on the walls, and the US and light sensor in front. One of the really interesting aspects was the floating support for the light sensor: 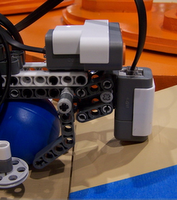 it was held perpendicular to the surface on a parallelogram mount that allowed it to pivot up if it hit an obstacle. A very nice design, thank you Laura & James!

Other things that happened at NI Week: we talked with the NXT-development team (face to face, finally) about the product and future directions (including the Toolbox that NI announced), played with NXTbots, saw some great Keynote talks (including one by Dean Kamen), played with NXTbots, Saw demos of RobotC (and all the nifty sensors Dick Swan and other folks have in the pipeline… accelerometers, cameras, etc.), let other folks play with NXTbots (remote controls are fun), and got to meet some amazing people. Thank you NI for a simply amazing opportunity.

Anonymous said…
That is kind of insulting if you ask me...having the NXT drive over a bunch of RCX's! Outrageous:-)
For those that haven't yet, go check out the brickshelf folder, it is packed with all sorts of pictures. Including, two pink NXT motors, Some "homebrew" sensors, Alpha-Rex wearing a sweatshirt, and tons of NXT.
I'm still curios, who painted the motors?
Aug 19, 2006, 6:46:00 AM

Christopher R. Smith (Littlehorn) said…
The pink is from the Energizer folks that made the Energizer Bunny. Most of the BROC companies were asked to build bots with the NXT kits.

I have been a bit busy this week. I have some additional photos I would like to share. (Brian, did you get my email?) I will get some links going this weekend.