I only got one picture, but I wanted to point out another robot that 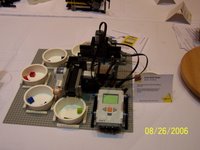 was making the rounds at BrickFest. John Barnes brought a nifty little robot that would sort different colored 2x2 bricks into circular bins. For anybody that has tried color sorting with the "standard" LEGO light sensor, this might seem like magic, but it's yet another example of a custom sensor that HiTechnic has been working on. Not only is it a nice demonstration of the color sensor, but it's a nice mechanical model as well, with a pivoting conveyor to drop the blocks into the proper dish. This is another sensor that a lot of us have been asking for for quite a while.

Anonymous said…
The Brick-sorter was a challeng, with the anticue Rcx light sensor , but with lego nxt sensor is very simple build robots to this process..

Kaffinator said…
I've been trying to sort by light intensity and having the darnedest time getting reliable light readings. Is it better to use ambient light rather than the LED on the light sensor?
Sep 8, 2006, 4:45:00 AM

Ezgi Kosak said…
nice robot can you help me and my friends out plz we need to build the sorter but were not sure if we have to redo our robot or just add the sorter can you help us plz!
Apr 21, 2011, 11:27:00 PM