BT, and sent a couple of files across for no apparent reason (although I’ll bet such filesharing becomes a fun pastime at FLL events this year; everybody bring your favorite sound file to share ;-). How do you use this within NXT-G? Once connected, NXTs can send BT messages to each other using the Send Message and Receive Message blocks. And unlike IR messages with the RCX, limited to a single number, these can numbers, Boolean values, even text strings (yes, you can turn your NXT into a really bulky instant messaging system ;-).

The tricky part is those connections – remember how the master and slave NXTs showed that they labeled the connection with different numbers? Those are the “addresses” of the NXTs. But each address can have multiple mailboxes as well, making for yet another way of sorting out all the BT mail that ends up flying around. It’s similar to how mail gets to an apartment building: all of it gets sent to the same building (which NXT, identified by a connection number), but you can also tag each message as headed for a particular apartment (the mailbox number).

If you take a 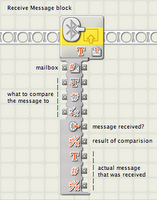 Confused yet? Here’s a simple se 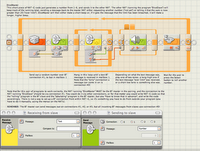 t of programs for the two connected NXTs. One (“DiceMaster”), running on the “master” NXT just generates a random number to send to the other one, and then waits for a return message from the second NXT telling it if the sum of all the numbers has exceeded some preset limit. The other program (“DiceSlave”) listens for a number to be sent to it, and then adds it to the total and checks to see if the limit has been exceeded, sending a message back to the master to let it know the result. Simple, but it does show how messages are sent both from the master to the slave, as well as from the slave back to the master. Note that a slave NXT can only send a message back to the master, so for a slave there is really only one outgoing connection: connection #0. And of course all the messages coming into the slave come only from the master as well, which is listed in the slave’s Connection menu as on connection #0. So I tend to think of this in the terms I used in the program comments: slaves both send and receive all messages over connection #0,

while from the master’s point of view, it can send messages out to any one of three addresses (#1, #2, or #3), but again receives all incoming messages along a single “line”, which I still think of as a “connection #0”.


Now, for any of you with two or more NXTs, experiment! And let us know what new quirks or features you uncover.

James Floyd Kelly (Jim) said…
It's a known fact that we Americans are terrible at geography... but we're great at history...

Brian Davis said…
Yeah, OK, I should be hung out to dry for that one... sigh, that's what I get for writing the text just before bed :-). OK, minor geographic blunder corrected. Now, on to my dissertation about one of the neighboring states to the north of me, Alberta...

Brian Davis said…
Certainly. But that doesn't mean that it can't be turned on, when not in competition, or when out in the parking lot, or while waiting for your run, etc.

For that matter, I could see it end up being a *useful* element in some future FLL event - with a reliable way to communicate, the possibilities of expanding the cooperative element is there - like for really big points, both teams have to push a button in the center at the same time.