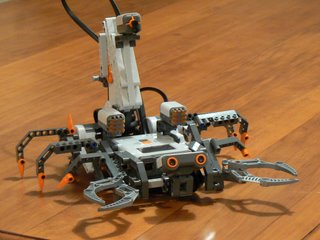 I’ve had a lot of fun with Spike throughout the year and thought it would be neat to give Spike the ability to not only respond to loud noises, but also move (and if necessary, turn) towards the loudest noise.

I started writing a program for Binaural Spike using a subsumption architecture idea in NXT-G, but found working with nested loops and switches (and global variables to pass data between MyBlocks!) much too frustrating. I gave up and switched to RobotC – and found it much easier…

Admittedly, the program is far more complicated than it needs to be, and doesn’t quite work 100% of the time. (By comparison, with a just a little help, my 5-year old son made a pretty decent program for Binaural Spike using NXT-G in about 10 minutes that works fine.) 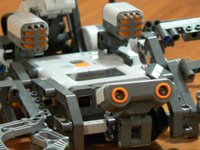 PS: If you’re expecting to program Spike using the USB cable, I’ve found that it’s a lot easier to get to the USB port if you reverse the direction of the NXT compared to the direction indicated in LEGO’s building plans.

This can be even more fun if you'd have 4 sound sensors so you could place one at each angle to give your robot even better directional hearing.

But from what I've seen of Spike, the motors - even without a high RPm - are situated in the back and would always tell spike to turn around. The end product would be a robot that spins in circles.

I would suggest giveing individual time to each party.
T
he sound sensors take a reading. The NXT compares the values (just like Max said) and turns the motors on accordingly.

Now, when the motors are on, the NXT is going to ignor the readings from the sound sensors. When they are off, it can take another reading.

The Ultrasonic sensor is always on, but its loop is set to false. When it sees something in front of it, it will be set to true and interupt any loops going on at that time.
Nov 24, 2006, 7:56:00 AM

Rob Torok said…
Thanks for those suggestions Max and Maniac.

Max, I think having the sensors pointing forward and back would make it easier to discriminate between them, but I'd much rather have a behaviour that would allow Spike to zero in on a sound source... so that he can attack it! As a teacher, I can think of many occasions where that would've been handy... (-:

It would be fun to work with more sound sensors, but I've only got access to two at present.

Maniac, I like the idea of simply having Spike disregard the sound sensors while he's moving. I was so obsessed with having Spike move smoothly towards the target, that I completly overlooked this possibility... d'oh!

Drew Stevenson said…
You can use a telescope limiter (blocks that form a tunnel around the mic) to get better directionality or better yet put a shield between the mics to cut sound from either angle to increase the difference between L/R sounds until it faces forward.

You could use Styro or something to isolate the motors but i like the ON/OFF change in behavior.
A little more complexity could allow the mics to CHANGE threshold when the motors are on or off. Thus it could still track a little bit when motors are running. You could even make the threshold a mathematical relation to the strength of the 2 motors (a low power motor has a lesser threshold and better accuracy while a higher motor power would blind it self more but only as much as needed)

That would of course only be needed if motor speeds varried. You could use trial and error to perfect a program which turns MORE or faster when the difference between the sensors are the larger.
Nov 25, 2006, 3:48:00 AM