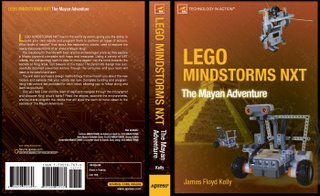 Here's the draft version of my NXT book's cover, along with details on the contents. The book is scheduled to hit the bookshelves on Dec 13, 2006. I'll probably post some more details about the book, as well as some information on the writing process and how I put the book together, at a later time.

If you're having trouble reading the text on the back cover, this is what it says:

LEGO Mindstorms NXT has hit the world by storm, giving you the ability to build your own robots and program them to perform all types of actions. What kinds of robots? How about 5 exploratory robots, used to explore the newly discovered tomb of an ancient Mayan king!

You are along for the ride with Evan and his archaeologist uncle as they explore a Mayan pyramid complete with traps and treasures. Using a variety of NXT robots, the archaeology team is able to move deeper into the tomb towards the secrets of King Ixtua. But beware of the traps! The pyramid has successfully avoided unwanted visitors through the centuries, and your team will need to be careful and alert.

You will learn and use a design methodology that will teach you about the new motors and sensors that your robots can use. Complete building and programming instructions are provided for each robot, allowing you to follow along and learn as you build.

Can you help Evan and the team of explorers navigate through the old pyramid and discover King Ixtua’s tomb? Read the stories, examine the environments, and build and program the robots that will allow the team to move closer to the secrets of The Mayan Adventure.

Rick Rhodes said…
Can't wait for this book to come out.

I read somewhere that 70% of NXT users are adults. Even if that's true, there are a LOT of kids out there who have or will have NXTs. This book is for them.

Anonymous said…
I like history and pyramids. I asked my mom for your book and she said okay. Will it come before Christmas? I can't wait. Is there a contest in the book to build robots?
Nov 9, 2006, 5:29:00 AM

James Floyd Kelly (Jim) said…
The book is supposed to be released on or before Dec 13th, so you should be able to get a copy before Christmas? I hope you like it...

The book does not have any contest, but the book is written in such a way that it has 5 challenges for you to solve. Each challenge has a solution in the book (building and programming instructions are included), but you are also encouraged to try and build your own unique bot to solve the challenges...

I can't say anymore without giving away some of the secrets, but you should have plenty of experimenting time ahead of you... the book is broken into 5 parts - each part has a chapter written like a story that sets up the challenge and the remaining chapters help you plan the robot and build and program it. There are 5 bots in the book, not 4 as the amazon.com description states. (And the main character is Evan, not Max.)

(And I like pyramids, too... I love the Incan, Mayan, and Aztec histories - you should read more about them when you have a chance.)

Brian Davis said…
Well, here's an idea that might work. Jim, if you wanted to, you could pick a particular challenge from the book, and then set a date to "enter your own" robot to complete it. Judged by the blog contributers, the winner would maybe get some recognition... perhaops here, on the blog.

James Floyd Kelly (Jim) said…
Nice idea, Brian. I'll see what I can come up with...

books are heavy, as they are printed in the US they are shipped, on a ship, to Europe. This is one reason why we get the books later. (From Europe distributors generally forward some volumes on another ship to the mid-east and southern Africa.)

Of course it is tempting to order with a credit card from a US bookseller, for delivery by airmail. ;-)