HiTechnic has started shipping four new cable lengths for the NXT, to supplement the ones that come with the NXT kit. For me perhaps the biggest frustration with the new cables (besides how stiff they are) was the lack of short cables: the NXT set only comes with one really short one, so for instance two-motor little rovers usually ended up with long coiled wires stuffed away somewhere. The HiTechnic wiring packages comes with four wires, each of a different length: 12 cm, 16 cm, 70 cm, and 90 cm (almost twice as long as the longest "standard" cable), with two shorter than the shortest "standard" cable (yes!

), and two longer. I tried to stretch them out to show the different lengths: the three middle cables are from a standard NXT kit (makred in green), and the others are the availible lengths from HiTechnic. At just $6.49 for a package of four, this makes getting a "double set" (so you have two of each cable) affordable if you really want equal-lengthed cables on both motors, for instance. As an exa 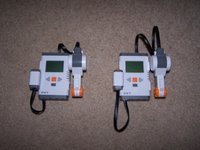 mple of how this reduces wire clutter, here's an image of two simple NXT set-ups: the one on the left uses the two shortest HiTechnic cables, while the example on the right uses the shortest availible set from the retail NXT kit. Which do you prefer?

You think you could have it done by Monday, Brian? ;)

As to the brick comparision, yeah, I had them in some models, but simple shows the point here - those short wires are going to come in handy.