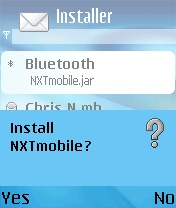 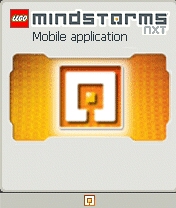 As blogged by Jim yesterday, the "NXT Mobile" application for Java phone arrived on the Lego Mindstorms web site yesterday.

There are a few odd things about it, for example no screenshots of the program on the web page or in the User Guide. Also the software has a different version for every phone it directly supports, and no guidance if your phone is not on the list to which version to try. 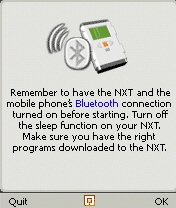 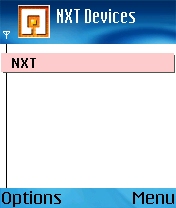 Anyway I have installed the Nokia 3230 version on to a Nokia 3230 phone. This is the phone model on both the Lego web page and on the NXT box.

The software found my NXT and allowed me to connect to it, and operate the NXT brick.

Alongside are some screenshots from my phone of installing the software and starting the program. 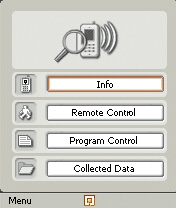 Would you like to give me a clue as to which network you use, or your preferred phone brand?

If you have a phone in mind you can check the manufacturer's website.

Tony Naggs said…
Motorola v360 -
As far as I can see from Motorola's online manual the v360 both runs Java (J2ME) programs and has Bluetooth.

Java access to Bluetooth is optional, and it is not clear whether that is available.

If Java programs can use Bluetooth then:
1. Maybe one of the JAR files in the NXT Mobile zip file may work. I suggest trying the version for Sony Ericsson K750 - I think this expects the least features.

2. Lego are likely to deliver new variants that work on further phone models.

3. Somebody else could write a similar Java program that will work.

The above linked French Java Developers web site seems like a good resource. But try to verify the information with the manufacturer's web site.

Nokia have an online features list for different phones - http://forum.nokia.com/devices/matrix_all_1.html Any phone with both Bluetooth and Java "MIDP 2.0" is likely to work.

The letter after the model just indicates the user interface:
i - international; English, other European languages
c - Chinese
a - Arabic ?

All information given in good faith. (If you use this to help select a new phone please verify it does what you want. I have not tested every model!)

Anonymous said…
Just a dumb question from the only person on earth without a cell phone. DO NOT ASK WHY I hate any type of phone. I spent all my life on one answering stupid questions like mine!

James Floyd Kelly (Jim) said…
I had a TREO for a long time that I continued to use simply for its applications (and games) - the phone service on it was turned off. Most phones that have these extra functions (including Bluetooth) should work normally even if phone service isn't turned on.

I suggest first of all waiting for more people to try the Mobile Application(s) on different devices.


GSM cellphones are sold "unlocked", or can often be unlocked. A "network locked" GSM phone is configured to only work with the SIM (Subscribe id) card for a particular network.

Even unlocked some GSM phones want a SIM card to be installed. At least in most countries of Europe, and in China, you can can buy a "pre-paid" or "pay as you go" SIM for a modest sum.


Another option in future could be a Bluetooth Gamepad. Assuming nobody beats me to it, I hope to add support for these when the NXT source code is released by Lego. (Although outside of Hong Kong these still seem rather expensive.)

Anonymous said…
hi , you have mentioned that the sonyericsson z520i can be used with the moblie application used for controling the nxt but i cannot get it to work can you please help me, i dont know why it wont work is there somthing i have to download to my phone or somthing i have to update on it??
regards , frank
Jan 2, 2007, 12:41:00 AM

Anonymous said…
okayyyy.... so does anyone know whether it is an easy step to leave the bluetooth gsm phone next to the model / include the phone within the vehicle, and then dial into it remotely from another phone and pass commands to the NXT. If (in the context of a rov) you had a 3G enabled video phone you could then thoretically take control of the rov from anywhere in the world where there is a phone signal, and see what is going on. Ideas?
Feb 10, 2007, 12:05:00 AM

Anonymous said…
I have a successful consistent connection between my Sony Ericsson K800i mobile and my NXT all loaded and working from the Lego mobile application site. Just follow the instructions exactly in regards to PC, NXT, and the phone.
IT also successfully runs the FUNKNXT program found elsewhere on this site.
It great to have a remote facility for the NXT.
Jan 29, 2009, 10:55:00 PM

Chris said…
I have a Nokia 6131.
I want to know, if there is a version of this program that works properly in my Nokia.

I´ve been trying but, none of the versions worked. So if you found or you know about a version that works, please send me an e-mail to chris.biancucci@gmail.com

Anonymous said…
Hey i have been trying to connect my NXT robot to my sony w810i but everytime i try to connect the two it says lost connection try to recconect, before it even connects. This is inside the mobile phone app i downloaded successfully, i can connect the two outside of the app however. the app recognizes my NXT and lists it as an option to connect to, but fails from there? Any thing i can do to fix this?
Jun 5, 2009, 8:06:00 AM

no longer seems to pull up anything except the Mindstorms home page for me. Just wondering is this the case for everyone? And if so, is there anywhere I can still download the bluetooth app? Couldn't find anything on the website..

Anonymous said…
there is working link to mobile app to drive NXT :

tjere only for a sony, nokia and benq.. BUT i have success to install it on my samsung! (i get one of the sony`s jar files)

after this there isno any action By selecting any above one option.............plshelpme any one