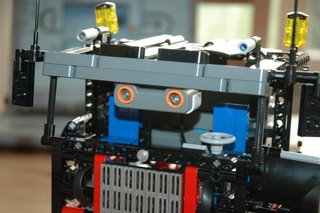 After Signing up for the MUP, Søren wonders who could combine the NXT with the big crane (8421) , unfortunately I do not (yet) own that box, so when I got the tow truck (8285), I started building the NXT into the second model.

I wanted to make sure that from the outside you could hardly see that the model was modified, but on the inside I had to fit 2 motors, one NXT and at least 3 sensors.

After a hard days work I had a partial model working however I was not yet content with the final functioning, although I did not use other parts then from the tow truck. (and the NXT electric parts)

Then on LEGO WORLD a friend continued the job, and made it almost perfect.

Anonymous said…
Oops, didn't know you considered the same and dubbed it equally NXTruck a year earlier!
For my version, see:
http://www.youtube.com/watch?v=2WQERL8ATXo