Well, if you are a fan of LabVIEW, or want to take NXT-G to the next level, it looks like Christmas has come a little early for you. National Instruments has finally released the LabVIEW Toolkit for the NXT, which allows you to program the NXT in LabVIEW itself (the “parent language” of NXT-G), and with a little more work will also allow you to make your own blocks for NXT-G. To download it to try it out, take a look here:

Some folks have already been playing with this Toolkit, including Steve Hassenplug, the folks at HiTechnic (check out their Downloads page), Guy Ziv over on nxtasy.org, and Jason King who has already developed some Text manipulation blocks, as well as myself (although I must admit, the others on this list have done significantly more than me at this point). More than one person is already on the way to adding proper array blocks into NXT-G, as well as math blocks, special display blocks, etc. The gloves are coming off…

The Toolkit allows a lot more than just making new NXT-G blocks as well: it will allow you to program the NXT 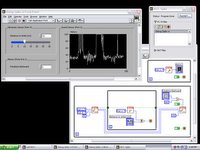 in LabVIEW itself, as well as communicate in realtime between the NXT brick and the computer. Essentially, it allows you to control the NXT just like you would other hardware, using LabVIEW controls and indicators. Here’s a screenshot of a program someone else has written to make Spike “do his thing”, all under LabVIEW. Notice how the data from the sensors (like the sound sensor) can be sent back to be displayed while the program is running, and commands (like the "distance to strike" setting) can be sent from the computer to the NXT program. That whole sound sensor graph is programmed by using just three symbols in a loop (the light gray rounded rectangles): essentially you just tell the NXT to send the value of the sound sensor to a graph (“history”), and LabVIEW does the rest for you.

I must confess I had not used LabVIEW before starting to work with the Toolkit, but I’ve rapidly grown to like it. NXT-G is a great language to learn some things under, and for a long time folks have liked Robolab on the RCX and NXT… and it looks like with the Toolbox, NI is opening the doors to the next level of graphical code complexity.

Anonymous said…
You have always been able to run LabView in Robolab and can now do so with version 2.9 on the RCX and NXT.

Why does everyone see this as a NEW feature.

Anonymous said…
Sounds like someone's a little defensive of robolab :-)

Brian Davis said…
This is not Robolab... nor is Robolab the same thing as LabVIEW. LabVIEW is a much more powerful and complete programming environment than Robolab. What's new is that this Toolkit allows you to run LabVIEW, with all the bells and whistles that the firmware is able to support, directly on the NXT.

Hehe. I'll never have to use those "jump" and "land" blocks again.