A Tale of Two Robots 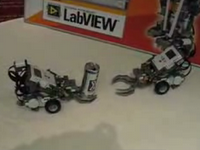 Guy Ziv over at nxtasy has posted a really wonderful demonstration. Using what looks to be stock Tribots with the addition of HiTechnic compass sensors, he's set up a demo where one finds a can, and then is "directed home" by a second, master Tribot via BlueTooth. Very nice, and fairly well explained on the nxtasy blog and in the YouTube video. Note that the first robot has no idea where the other robot is, and once it has ahold of the can it is unable to use its US sensor effectively anyway - essentially, it is blinded by the can it is carrying. So the second robot has to do all the directing of the "blinded" robot, finding it and directing it as to what bearing to follow, and letting it know when it is at the correct distance to deposit the can. This is a very slick demo of what can be arranged with a couple of compass sensors and some good thoughtful programming. Heck, with this set-up, the "master" robot could find its way through a maze or other narrow path, and then communicate the sequence (bearing distance pairs) required back to the cargo-carrying robot. There's a lot of nice potential here. Here's the YouTube video, but you really should read Guy's description over on nxtasy as well: