Sometimes (often!) a LEGO creation is inspired by something in "real life". For a long time I've been impressed by high-mobility vehicles, for instance iRobot's PackBot design. 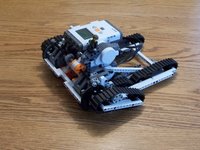 PackBot is currently used by the armed forces for finding IEDs, or scouting in urban environments, and is a wonder of engineering and design. While I've tried to implement this in LEGO before, I never really succeeded. Either the robot didn't have torque from the motors, or it literally tore itself apart from the forces on the frame.

With the NXT I had a much better start: higher-torque motors with more control, as well as a studless system that encouraged connections that would not come apart easily. After a couple days, I came up with Unit LNE (LEGO NXT Explorer) of the Dinochrome Brigade (10 pts if you catch the reference ;-). Based on the PackBot design, it can climb a steep slope (30° or more), scale mountains of dirty laundry (or RCXs, or minifigs), and climb up steps taller than the robot itself. It can also flip itself back upright if it finds itself upside down (an accelerometer from HiTechnic is very handy in this regard). The first hurdle was getting one motor to drive both the belly treads and the flipper arm tread 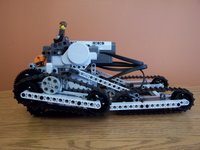 on one side, while still allowing the "shoulder" to freely rotate 360°+. The harder part was actually making the structure strong enough to take the resulting loads and torques without twisting apart.

Sometimes looking at the world around you can give you some very challenging ideas for a robot. LEGO is "just a toy", but as an engineering tool it can be used to model some very impressive creations... but of course, I probably don't need to tell readers of this blog that :-).

More images can be found in my Brickshelf folder as well.

Anonymous said…
I love the videos! That Shuttle set must be pretty sturdy not to show any strain when a robot climbs up it:) And the fact that it can flip itself over if it finds itself upside down....wow

I tested both URLs and could not get them to work. Please email me with details on what these websites are about.

Brian Davis said…
Thanks for the "genius" commnent - I'm pretty pleased with getting it all to work in as "small" a package as I did (but trust me, it will probably get better... just give me time). The real genius behind the design is the folks who originated the PackBot chassis, in my opinion. I remember my jaw just dropping when what starts out looking like a rectangular slab of metal is thrown over a wall, flips over, and then goes and "runs" up several flights of stairs.

The model in the videos is under BT remote control (my original remote, actually, works great), as I needed to test the mechanical solutions before mounting sensors and spending a lot of programming time. But with the HiTechnic accelerometer, it can detect when it's upside down (it then enters autonomous mode to right itself, before returning control to the user) or what sort of angle it's trying to climb. Honestly, this was one of the uses for the accelerometer I was looking at very early on... but most platforms can produce angles steep enough for it to matter. This one can.

this little devil is great!
Looks almost frightening - when the Great Robot Uprising comes, the more evil ones will most likely look like LNE (unstoppable, with big terrible whirling front chains).

Do you intend to post building instructions for the prodigious thingy?

Brian Davis said…
Building instructions would be great, but I'll have to think carefully about the assemble order. It went together like one of those three dimensional puzzles, and even figuring out how to get some sections apart for me is difficult. I've got to think carefully about how to document it so that others can understand the plans. But yes, I'll try to move that way.

A roll bar for the minifig would be good, but there are safer places to put him (right in front) that I'm already working on. Besides, it was fun rolling the whole thing over him :-).

The video needs a pounding, sinister soundtrack to make it complete. (I suggest "Troops of Doom" by Sepultura).

Most Viewed - Science & Technology (All)

Brian, YT should offer you CASH for these awards. (They're making money off of you).

Brian Davis said…
As to more pictures, yes, I'll try to get some soon... it's just hard because I keep redesigning it. With regards to YT making money off me, well... admitedly they are giving my free webhosting with no promises of me making any money for them, so I'll call it even. When LNE starts fighting with Lonelygirl for top honors, I'll start demanding payment in advance :-). Yes, I need a soundtrack (and better video... but who wants to edit video when they could be building). I should see my son giggling as I try to drive it over his legs (it does tickle).

Anonymous said…
you really need to make biuilding instructions also were did you get the extra turntable other then a second nxt kit
Jan 27, 2007, 3:12:00 AM

Brian Davis said…
Just a brief blip if anybody is reading comments this far back... I've uploaded a bunch of new images (including "puzzle" construction images... enough information that with some careful thought, you can figure it how to reproduce it) and a new video (be kind, I'm new at this). Note sure when it will all go public (I'll blog then), but for now:

*Bows*
I really like the new video (it's up). The stairs are good (a little...deep) and the packaging peanuts are so funny:) Your pilot is probably thanking you for sticking him elsewhere...but now the ultrasonic sensor and the NXT brick are taking the brunt of a fall... is that safe for the electronics? I'd consider building a roll bar.

What treads did you use for your AWESOME robot? I have some that could fit a 12M (13-hole) bean, but not on the larger wheels you used. The treads I have were bought on the Lego Education website.

Thanks for any help finding longer (?) ones.

Anonymous said…
I tried to make one at home, but I had trouble with skipping gears, even when they were fixed right "nxt" to the turntables. Can you leave a comment telling whether you had similiar problems ?
Mar 19, 2007, 2:09:00 AM

kassim said…
hey man my name is kassim antar
i live in potugal but im not portuguese
look at school we r doing this lego mindstorm team and i have to get realy good at it so i could be part of the team and travel to other countries for the first time so please can u send me instructions to how u built the lne lego packbot so that i could make it and qualify to the team. my uncle got me the lego mindstorm nxt. please please send the instructions to me man im begging u please. this is my e mail liverpool_kass94@hotmail.com. once again please? if u cant then tell me soon cus i have to do a minstorm machine before the 19th and today is the 14th. plz
Sep 15, 2007, 3:55:00 AM

Anonymous said…
great work... i think i will have to try this one...

one of my favorites...

Anonymous said…
Try to build something like a packbot explorer or EOD? But then you'll probably need a second NXT to use all those motors!
Jan 23, 2009, 4:22:00 PM