Neural Network Manager for the NXT 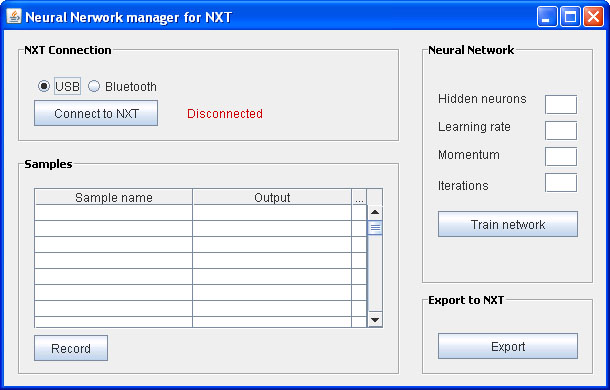 Christoph Bartneck, Assistent Professor at the Eindhoven University of Technology, has blogged about a new Java-based application with a graphical user interface that "allows Lego fans to easily create, manage and train a neural network which can be exported and used in any program to be designed to run on the LEGO NXT."

From the web site:

Unknown said…
Well, what are neural networks good for in general?
Mainly to deduce functions/algorithms from observations (sensor data) where the input data are very complex and thus such a function or algorithmus cannot be derived a priori.

That's the case for the environment living creatures are moving in, for instance, so their brains are very complex neural networks (to say it somewhat simplified) that learn (are trained) from the beginning of their existence on.

Hence, neural networks can be very important tools in robotics in training autonomous robots to move around in complex environments: real adaptive robots that behave appropriately in a complex and changing environment must be able to make decisions of their own (that are not pre-programmed) and to learn from former experiences.
Apr 24, 2008, 6:04:00 PM

Unknown said…
Our students implemented two direct uses for it: a voice command system and an OCR system. The latter used the light sensor to scan a letter. The NN was trained to detect letters. The voice control system allowed the NXT to learn spoken commands.
Apr 24, 2008, 6:25:00 PM

Anonymous said…
I was impressed by your project, I downloaded lajos and uploaded the java NXT files to the NXT brick because your explanations were detailed and expressive, yet the second I reached run the nn manager I got lost I tried to include it in eclipse I tried to compile the sourse file just to get the manager up and running on my computer but it just wont work can you please tell us a bit more details on the nn manager computer side?
Thanks in all cases
M.T
Dec 10, 2008, 2:06:00 AM