I keep ending up with a list of things to mention, but not enough time to do it (or not enough material for a full post), so here's a brief roundup of a few things. So in no particular order...

The HALE mission has put out a nice YouTube video, showcasing some of the video as well as the still photos from the ground team end of the mission. It also gives (at the end) a run-down of some of the faces & names involved. Take a look, and enjoy the music & presentation. 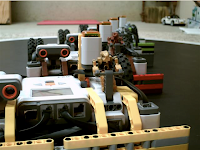 Steve Hassenplug has come up with a novel robotics game he's named "PSumo" (for "programmable sumo"). The idea isn't to make fantastically complicated or fast sumo robots, but instead to make a series of nearly equal robots that casual observers can "program" by using RFID cards swiped by a sensor on the robot. It was a huge hit at the recent Brickfair event on the east coast, and I'm sure we'll see it a lot of other places. We'll probably have a detailed blog post on this soon. 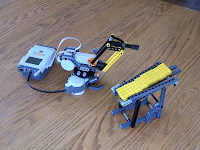 A number of people have asked for plans or more details on my recent PnP arm, wanting to duplicate it or at least understand it better. While the odd, very-non-rectangular geometry makes it difficult to reproduce in LDD, I did do the arm itself and a partial attempt at a loading pallet. I've put those up along with some images and a stripped-down NXT-G program & video up on NXTlog, for anyone who wants to try it. Let us know what you do with it.

Here's a novel physics demonstration (hey, I'm a physicist, what did you expect) of non-linear resonance. Want to make a pendulum stand up the wrong way? Vibrate the support point fast enough, and you get an interesting effect... 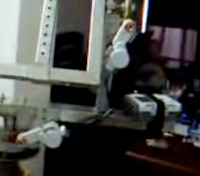 Finally, what do you get when you couple something like Jim's camera platform with heavy metal? A camera panohead that looks like the NXT was grafted on to a butchered store display frame, but it works :).