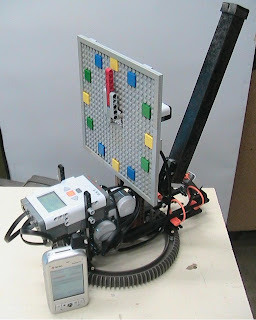 After building a robot that fired Bionicle balls at a light, my son suggested I use the same platform to build a Sundial Robot. The robot uses the NXT brick, 3 motors, Compass Sensor, Light Sensor, Touch Sensor and ~270 other parts. Three non-standard parts are used: The big wheel from the Star Wars Hailfire set, a cardboard tube to enclose the light sensor, and a PDA. The PDA is used to perform the trigonometric calculations required (because I was too lazy to implement trigonmetric functions on the NXT). In operation, the robot rotates 360 degrees to calibrate the Compass Sensor. It then rotates in 5 degree increments, the light sensor is swept from vertical until the Touch Sensor is pushed. 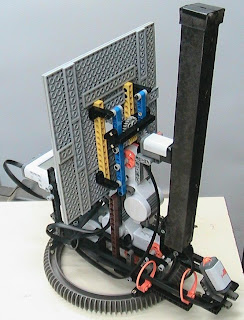 During the sweep the maximum light level seen is recorded. Once the robot rotates from 70 to 270 degrees magnetic, the NXT sends via bluetooth the magnetic heading where the maximum light level was seen. The PDA then calculates the time and sends the result to the NXT. The NXT then sets the clock to the time. In practice, the robot is accurate to within 15 minutes or so.

jacket60 said…
Thanks for sharing your very interesting model of a sundial. I'm relatively new to NXT and I would be most interested to learn about the software required to communicate with the PDA (or PC). I don't need any details, but I would appreciate learning where I could find out more about this interface.
Sep 3, 2008, 4:40:00 AM

Anonymous said…
The NXT-PDA connection is via Bluetooth. The first thing you need is the Bluetooth Developer Kit from Lego at http://mindstorms.lego.com/Overview/NXTreme.aspx. Then comes the hard part, establishing a connection. This is very PDA dependent, but essentially you need to establish a outgoing serial connection from the PDA to the NXT. If you can accomplish that, then it is simple serial communications.
Sep 3, 2008, 1:13:00 PM

Unknown said…
Besides, yesterday there has been an entry on the UK-based tech site ElectricPig about this machine (and it erroneously names Jim Kelly as the builder - someone there obviously has not read the article here very carefully).
Sep 4, 2008, 5:32:00 PM

Dan Taylor said…
In combination with Michael Hunger's recent article using legos as a time tracker, it seems to me that legos could quite possibly be one of the world's most creative and inspirational 'toys' ever.
Sep 4, 2008, 6:06:00 PM