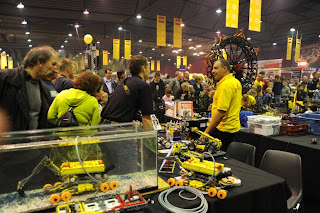 Today was the first day of LEGOWORLD 2008.
At the MINDSTORMS booth we had a visit of Søren Lund (former Marketing Director MINDSTORMS), and I could show him and his family:
The NXT-sans (an underwater excavator build for NI-week). We displayed it inside a large tank of water. (do not put motors or other electrical LEGO parts under water at home!)
Also an almost 3 meter high ferries wheel, as part of a MGBC (Much Greater Ball Contraption= GBC with MINDSTORMS balls), the balls are first put in a basket that is picked up by the wheel, for a round, to clear out the basket at the other end. There the balls continue their journey in a train.
Most of the books (including a pre-press version of the One-Kit Wonders) are available for a look inside, and several models can be seen in real live.
You can play with the new WEDO form LEGO Education.
Various line followers are shown, and a copy of Steve’s Hassenplugs P-Sumo.

Robotica said…
a youtube movie of the MGBC giant wheel

Brian Davis said…
Having watched that YT video, I'm very curious how you build or transport something like that. My entire collection wouldn't be enough to duplicate it - but that's "just parts". I'm curious how large a workspace it takes to construct on that scale, and how such behemoth projects are transported and set up.
Oct 17, 2008, 11:07:00 PM

the wheel was build in two halfs and connected at the show.
the pillars and the spokes and center were all separate parts, the complete, surrounding track is modular, like the GBC. The most of the baseplate models have a max dimension of 2x3 32 baseplates.