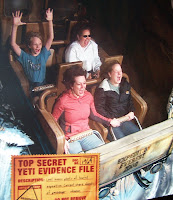 About a year ago, I blogged about datalogging acceleration profiles of several rides at Walt Disney World, using the HiTechnic accelerometer and the NXT. Well the story doesn't end there. I mentioned this information on a Disney fan site, where not only were people interested in the results, but asked for more - particularly a ride called Rockin' Rollercoaster, which uses a linear motor to shoot the train forward at high acceleration straight into a loop. The problem was this coaster exceeds the 2.5 G limit of the Hitechnic accelerometer, so I decided to try again, using the "Version 3" accelerometer from Mindsensors, that can reportedly measure up to 10 G's. Mindsensors very graciously providing me with a unit to test, and I thought this would be the ideal way to do it... subjecting the hardware (& myself) to high-G rides, and review a sensor in the process. 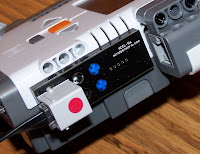 accelerometer was mentioned here back in August: it has a user-selectable range (2.5, 3.3, 6.7, or 10.0 G) and comes in a much improved form factor. Small, flat, and protected, it was much more suited to the type of abuse I was planning than the older versions. Controlled via I2C, it proved fairly easy to use from NXT-G using the custom I2C blocks. It also mounts firmly with the blue axle pins: pinned to the side of the NXT, it never came loose (even when I ended up sitting on the NXT on one ride at over 2 G’s). The increased range and high resolution of the sensor were nice pluses as well.

There are a few cautions I uncovered however. I was worried about shearing off the exposed-looking female port, although as noted it seems to have held up well (& most people would not treat their sensor this way). The increased flexibility in range (good) seems to be coupled with a slower response time (not as good), compared to the HiTechnic version: while the LEGO-certified sensor can be sampled about every 20 ms, the Mindsensors V3 seemed to take around 70 ms per reading (this may have been due in part to the way I was accessing it from NXT-G, but I used very similar routines for both sensors). For ease of use the HiTechnic NXT-G block allows access to all the sensor readings in a single operation, while the current Mindsensors NXT-G block only returns one value, requiring potentially 3 separate reads to get the data I wanted (note this was not why the sensor was slower in my tests; I got around these limitations by driving the sensor straight from the I2C level with multi-byte reads).

ial kick-in-the-pants acceleration is “only” about 1.6 G’s, but as it shoots up into the 1st loop accelerations on the rider rapidly mount to more than 4 G’s, with the total accelerations topping 3 G’s a couple of other times (this 4 G reading was the maximum sustained acceleration I’ve recorded in the park so far, for those of you who like the extremes). The initial horizontal acceleration could even be integrated to show a terminal speed of 53+ mph as it exits the launching area: one of the very few times I’ve been able to use pure acceleration data to get a good estimate of speed and position (0 to 53 mph in 3.2 seconds or 160 ft). The Tower of Terror

is a ride that subjects you to the equivalent of a possessed elevator, shooting you up and then immediately putting you in free-fall in an unpredictable 45 second sequence. Here the data showed that peak accelerations are carefully controlled to 1.75 G’s, and when it drops it really does briefly accelerate downward faster than gravity alone (not that you doubt this, as the seat is literally pulled away from your body as the elevator suddenly drops… it was “interesting” trying to keep the NXT firmly positioned on the seat with one hand while my body was thrown up against the insubstantial-seeming lap belt). There are also periods when the ride acceleration is carefully controlled so that you are “falling”, but not as fast as gravity would have you – I didn’t actually notice these at the time. Test Track

(a ride in a computer-controlled car) subjects you to at least 2 G’s of acceleration in the high-speed exterior banks, with many of the turns, banks, and drops easily seen in the data. Expedition Everest, which I’d previously logged as “at least” 2.5 G’s, showed it’s extremes with the new sensor at almost 3.8 G’s at the bottom of the biggest drop (and several others breaking 2.9 G’s). I even datalogged Splash Mt again, Goofy’s Barnstormer (a “junior coaster”), and one of my favorites, the Spinning Teacups. With a strong hand and a stronger stomach, I could easily crank the hand-powered teacup around at perhaps 40 RPM, experiencing almost 1.5 G’s in the tiny ride (and nearly making some of my passengers a little sick… hey, sometime one has to sacrifice in the name of science).

For the full range of results, as annotated graphs, please look at my Brickshelf folder (after moderation). All the newest data has been labeled with the prefix "DLD" (for DataLoggingDisney, the name of the program I used to to this):

Datalogging Folder on Brickshelf (after moderation)

For anyone curious as to how bulky or awkward the NXT is for datalogging, here's a picture of the setup I took - the entire 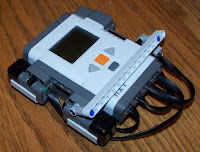 thing will fit in my pocket. There are actually four sensors: two for acceleration, one for pressure (to determine elevation if I wanted), and a touch sensor that can be used as a fourth "button" to label certain points in the datastream. Over the front is a flip-down button guard, to keep me from accidentally stopping the program or turning off the NXT during a violent ride. I'd love to see some others do this sort of thing - as many of you now have the technology to do this literally sitting in your house, and as an educational opportunity is is almost unmatched (I'll be happy to sent a copy of the program and instructions for those interested). That’s actually about all the big acceleration rides at Disney. I guess I’ll have to start hitting Cedar Point and some of the Six Flags establishments now ☺.

Anonymous said…
i was thinkin' to build a similar construction to measure accelerations in a simple car ride.
i could check what kinda driver is in the seat...

Anonymous said…
Brian/Mr. Davis/Master, come to the UK! Do Alton Towers. The rides there are way better than Disney. They have Oblivion, the first vertical drop ride in the world (man I'd love to see the graph for that!), Rita: Queen of Speed, which accelerates from 0-100km in 4 seconds and other cool ones. Please do it! Oh yeah, thanks for doing it again! 10Gs? Pretty strong.

Anonymous said…
Sorry, that last comment didn't make much sense. I meant to say thanks for taking the sensor array to Disney again, and that the Mindsensors sensor was pretty strong.

Brian Davis said…
pe-ads, I'd love to take this set-up to the UK... or anywhere/everywhere else for that matter! Yep, there are a *lot* of other options for this sort of thing. But (as much as I'd like to) I can't currently run around doing this everywhere. However... our readership can. For anybody that has an NXT (likely, most folks reading this blog) and can afford an acceleration sensor ($40 US maybe), this sort of analysis can be done *all over the world*. I can't do it alone... but I'm more than happy to supply ideas, programs, and know-how (thus why posted).

Anonymous said…
Hmmm, thanks, Brian/Mr. Davis/Grand Master of All Things NXT. I was only kidding in my comment! I am hoping to go to Alton Towers again sometime next year (probably Summer), but I'm not sure I could spare £20-30 (what is the exchange rate now?). Also, I'm not sure my programming is good enough yet :P ! I'll think about it...

Brian Davis said…
Ah, as to programming... well, I already developed the program, and would be glad to share it (as well as how to deal with the resulting datafiles). All it takes now is somebody with a sensor (either the Mindsensors or the Hitechnic one) and the opportunity to use it...