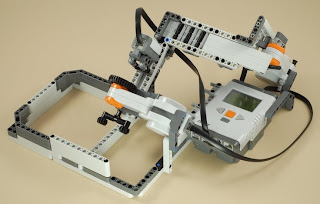 This NXT Peg Sorter will sort long black NXT pegs from long gray pegs, into two separate bins. A conveyor feeds pegs down in a chute, then the light sensor is used to see the color of the peg as it is sliding down the chute, then a hitting arm hits the black pegs to the side while allowing gray pegs to fall straight down into the other side.

Here is a video of the machine in action:

There are simpler and more reliable ways to sort pegs, but with this project I wanted to do something similar to the way some modern high speed mechanical sorters work in factories. In some of these machines, the items are thrown quickly past a gap in the conveyor belt, where an optical sensor looks for rejects, and then air jets are used to knock the rejected items down through the gap into a reject bin, while the good items continue past the gap to the other side. The challenges are to quickly detect a reject and then to get the right timing between seeing the reject and pushing it out of the fast moving stream. An example is this machine for sorting vegetables (see also the video at the end of the page). Another example that is simpler and closer to how this peg sorter works is seen in this video of a colored pencil sorter.
In this NXT Peg Sorter, the gray pegs are the "good" pegs, and the black ones are the "bad" (e.g. burnt) ones that need to be rejected. The speed of this sorter is limited by how fast the hitting arm can recover after hitting one black peg (not nearly as fast as an air pressure jet can recover), but the rest of the machine is capable of sorting much faster. I didn't put that much time into designing a good hitting arm, so there is definitely room for improvement here. How fast can it get?
Labels: light sensor peg sorter sorter

megamindstorm101 said…
finally! (not to say your other projects were bad becasue i built each one a minimum of 2 times (other than santa which im not really planning on)) SOMETHING AMAZING. I have always loves sorters and the only one I made was Laurens Valk's bricksorter (still one of the best I have a small pic on my bullitain board) and now this peg sorter. Thank you I will build it soon.
Nov 30, 2008, 12:37:00 PM

Anonymous said…
Looks like you may be able to improve the cycle time by not rotating back to horizontal with the kicker. Tough to tell from the video, but it looks like you rotate to kick, and rotate back to position for next.

Dave Parker said…
I'm actually telling the kicker to rotates 180 degrees, so the next half is ready to kick, always in the same direction, but the NXT motors at full power overshoot by a lot, and then the controller then needs to back it up to get back to the requested degrees.

As mentioned in the "Challenges" section of this project, I'm sure there is room for improvement on the kicker mechanics that will make it have less of this problem, then be able to cycle faster as you say, e.g. a 4-armed kicker that doesn't need to move as fast and as far.
Dec 1, 2008, 2:37:00 AM

Parax said…
Perhaps you could do better by using a timed burst and a timed brake then check the angle is acceptable, you could tune your timings based on the angle error.
Dec 2, 2008, 4:45:00 AM