Using the NXT in FTC 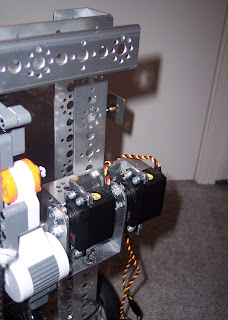 Now that the FTC season has gotten underway and my team has been working on our robot, I've gotten a chance to work with the TETRIX pieces and to use the NXT and other LEGOs with them. The TETRIX system is really nice... it opens up so many possibilities with the NXT system. However, I like to think of it as a sort of "block building" system compared to the NXT. It doesn't have a very wide variety of parts, and most of those parts aren't very small pieces useful for making detailed mechanisms. This makes LEGOs very useful when you need a complicated design in the robot. The big, ultra-strong TETRIX metal is great for the framework and simple, powerful mechanisms, while the NXT pieces are helpful when you need something complex. We've already found a use for NXT pieces in one of our robot's modules, and I was really glad to have had experience with the NXT beforehand. If anyone out there is looking to join an FTC team, your skill with LEGO MINDSTORMS could be very helpful.

One of the main differences I've found between using the NXT for FTC and my other projects is the need to make it work with non-LEGO objects. Our LEGO mechanism had to work with hockey pucks, which weren't designed to fit exactly with LEGO pieces. It's a neat challenge trying to work around this.
-Jonathan
Labels: FIRST Tech Challenge FTC