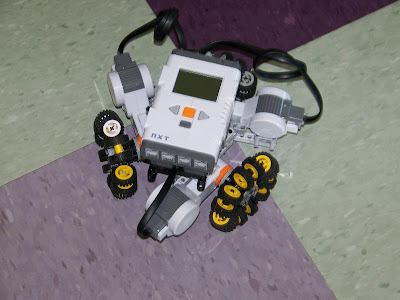 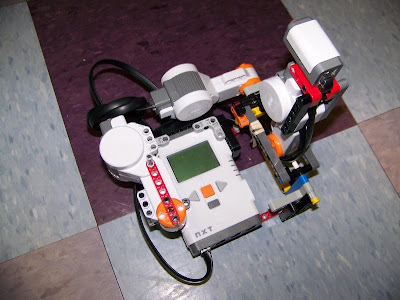 This omni directional robot made by jason701802 has a very user friendly remote control allowing much better control over the robot. The right joystick can be moved forward/backward/left/right to move the robot correspondingly forward/backward/left/right. This is not an easy task as all the wheels are spaced 120 degrees apart. The left handle controls the spin. Well done!

The video that demonstrates how the remote control works can be seen here.

Instructions to build the omni robot the NXT-G program can be found here.

This is what jason701802 says about his controller:

"I used a modified version of Philo's Joystick with a third axis to control the spin. The controller scales the values from the servos to numbers usable by the robot. The robot then converts the x,y, and rotational values into the outputs for the motors. I have condensed the program so that the controller and the robot both use the same program."