Another use of the NXT in the "real world" 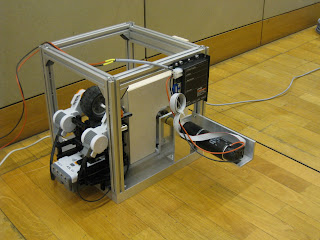 Remember the post on the Lunar Robotics Challenge where robots simulated a moon mission? I said that no NXT took place, but a reader of our German sister blog Die NXTe Ebene proved me wrong: there was a NXT involved! Not in a robot directly performing the mission in the crater, but as a supplementary system: it ran the device that operated the power line and the rope that pulled the robot from there.

This is another nice example where the NXT kit is used in "real world" robotics.

Have you heard of other such projects where the NXT played a role in rapid prototyping or in another supplementary way in the academic world or the industry? Tell us!
Labels: Lunar real-world application