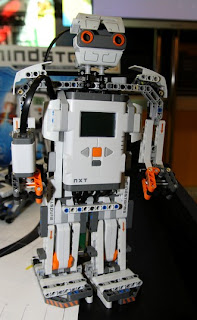 New images from toy fairs all over the world slowly pop up. Gadget review blog Pocket-Lint states, "Mindstorms NXT 2.0, will focus on offering 10 to 14-year-old boys a good robot experience rather than trying to appeal to the hardcore fans that use the kit.
Other new features include the inclusion of ten robot instructions from the software rather than two as in the previous model."

The article also tells us that this kit will cost around £200, which is about $285. However, these prices may vary per country: LEGO usually has different prices for different countries.

If follow the article link and click on more images, you will also see something which appears to be a new NXT- G feature, a remote control. This would suggest that the kit comes with newer software than version 1.1, which currently ships with NXT kits.

Update: One of readers correctly states that the target audience referenced on the Pocket-Lint blog doesn't cover the complete audience. Of course, Mindstorms NXT 2.0 is suitable and fun for both boys and girls, and I do not see the reason for a maximum age limit, either.
Labels: alpha rex Color Sensor NXT 2.0 NXT-G

Laurens Valk said…
"Other new features include the inclusion of ten robot instructions from the software rather than two as in the previous model."

I'm not sure, but it seems the author refers to the Classic clock and the robot DJ on mindstorms.com.

Additional models would indeed be a nice feature

L3G0Bots Lady (;-p) - V.G. said…
Your blog said, "Mindstorms NXT 2.0, will focus on offering 10 to 14-year-old boys a good robot experience rather than trying to appeal to the hardcore fans that use the kit."

I hope that was a misprint about the BOYS only. There is a growing number of girls who participate in LEGO robotics & the FLL. The Girls Scouts have a national inititative to bring robotics to more girls.

Hey, I'm a female & I enjoy building NXT robots - I'm looking forward to getting my hands on the kit.

That's completely right. It was actually a quotation from another blog.

Christopher R. Smith (Littlehorn) said…
Laurens is quoting the "boys" statement from the UK PocketLint blog. I doubt this statement originated from LEGO.

Out of the FLL teams I've mentored 2 were girl-only and the 3 other teams consisted of at least half girls. Of those half-girl teams...the girls went on to operate the robots at most of the competitions. At the FWF '08 in Atlanta...there semed to be roughly half and half attending.

There is a note somewhere about the female FLL registration numbers increasing every year. Does anyone remember the numbers?

I like your blog, LeGo-Bots Lady. Especially, the post about the NXT Dragster being your Favorite from the One-Kit book.

IrateCorpse said…
This does look exciting but I'm struggling to see any major differences they couldn't implement on the NXT with a firmware/software update.