The new MINDSTORMS NXT 2.0 box is shown at a toy fair in Canada. 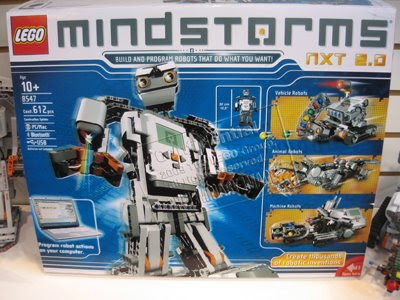 After some rumors and spy shots that we saw the last few days, now officially the new sets are revealed on a toy fair in Canada.

Among the many prototypes on display at Lego Canada's booth at this year's Canadian Toy & Hobby Fair were a new set of Mindstorms programmable robots and construction sets for two new science fiction brands. Power Miners is a series of fantasy machines that dig down into the earth to discover rock creatures and Space Police, a futuristic battle between law enforcement agents and the outlaws who try to escape their capture.

a new color sensor, 612 pieces, 4 New models, Cool looking Alpha Rex, a zamor shooter tracked vehicle, an alligator that can walk and snap, a color sorter that can also shoot the balls across the room.
The all new color sensor looks real cool. 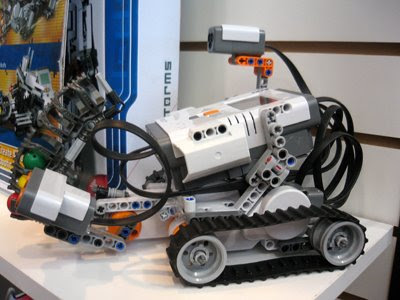 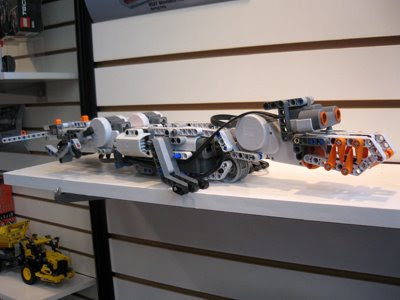 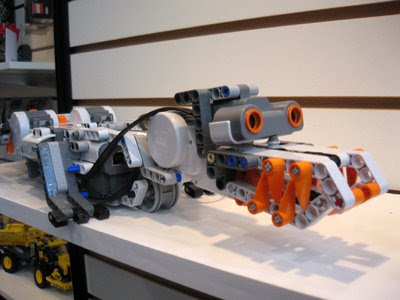 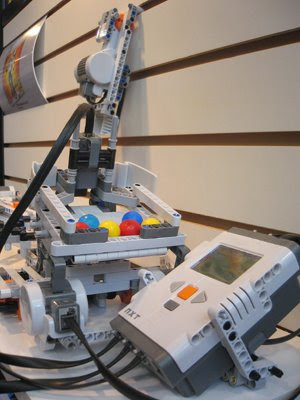 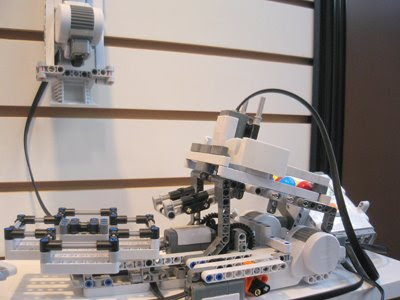 Looking forward to see the new Alpha rex walk, on a movie.

Anonymous said…
Hmmmm.... Is it Really?

If it is at least "The 2.0", it has 4 or more motor, more sensors and more functionality.

But.. the NXT brick seems to be not changed... right?

Anonymous said…
Yes, that does look like a version 1.5 rather than a version 2.0. But I for one look forward to being able to purchase the balls and colour sensor shown separately.

Laurens Valk said…
In the RCX days, the 2.0 wasn't much of a change either. I think it is good that the NXT brick isn't changed (if this is right), so that all NXTs are still compatible.

The pictures look interesting. I like the models, but it seems they removed the robotic arm...

Anonymous said…
Woo hoo! This looks great!
I've always wanted the zamor sphere magazines, but never bought them. I've also wanted another NXT for a while. I also want NXT-G 2.0 (I hope this comes with it!). If it comes with NXT-G 2.0, I'll definitely get this.
@Laurens Valk, I think continuing in the RCX tradition is good, however I would have liked to see a slightly improved version of the Brick, i.e. more memory. We don't know anything else, though, so it could have changed inside.
Also, we don't really need a NXT Brick with more ports, because touch sensor and motor multiplexes are already available.
Question: Can the Colour sensor sense ambient light?

Anonymous said…
Anybody knows when it will be available? I cant find anywhere more information about this. (Which is good advertisement for this blog, though) ...anyway a bit more Infos would be great, as it is presented live in Canada. The guy who took the pictures didn't catch some more details?
Jan 28, 2009, 1:15:00 AM

megamindstorm101 said…
I think that it is perfectly fine to have no changes to the brain of the robot. It doesnt really need any. I can store plenty of programs on it so I dont care to complain about memory. If it does get filled up I can just save it to the comp. I of course am a hardcore nxt fan.I already have two NXTs so I would love to have a third :) I just need to save my money. I would hope that the color sensor is also a light sensor but im sure it can at least measure ambeint lighting. What happened to the sound sensor? I cant wait for it to happen.
Jan 28, 2009, 1:19:00 AM

Anonymous said…
There will never be a 4 motor NXT. Not enough juice from the batteries to drive four motors, four sensors and run the brick. LEGO is too conservative.

The color sensor will probably be available to FLL, but I don't see it making much difference. Until color sensors are ubiquitous Scott won't design a challenge where the one would offer a clear advantage.

BlueToothKiwi said…
MegaMindstorms101,
It looks like you dont have the sound sensor any more in the new packaging. But are you really going to miss it? I rather have two touch sensors instead.

Dean, the NXT-G version 2 that is currently out is actually the Education version. The new 8547 retail kit version of NXT-G will undoubtedly be different - although it may share some of the new features the Edu version has.

What do everyone think of the new models in Martyn's post?

Anonymous said…
It's hard to tell from the pictures, but I think LEGO is continuing in their tradition of poorly designed kit robots. I swear they must do it on purpose.

megamindstorm101 said…
I heard the software was some user designed software? Like I think they took lots of the ideas from posts on nxasy and stuff and tried to fix it. The edu version seems more for students and less for general audience so if they made it into a retail software it wouldnt work as well anyways.

I dont miss the sound sensor too much (I already have two so thats good)It wasnt that usefull but I could find times where it was usefull.

Dean I think that you shouldnt be able to say anything about the "non working alpha rex" in the new set until you try it. Of courseif you have already tried it then I cant say anything. IMO I think these models are FANTASTIC not necesarrily as good as the old NXT but they are definately cool. I cant wait to see how the new alpha rex works. The one I look forward to is the bricksorter and my favorite peice that they included so far is the zamor shooter. I keep wanting one but I only have one shooter with two balls so I had no magazine and no way to relly have a machine shooter just one shot and ur done.

This set is fantastic and idk what everyone is compaining about its great. I am definately looking forward to this one and the new color sensor. But like I said before most call me obsessed.
Jan 28, 2009, 9:55:00 AM

Anonymous said…
Looks like a good refresh for retail even if it includes little new technology.

Any idea how the color sensor compares with the one from Hitechnic?

Given how conservative and even handed FLL tries to be I'd be surprised if they allow use of this new color sensor. Even though the RCX was all but killed this year they might still be sensitive to keeping some sort of electrical parts balance between the two systems. They restrict use of some electrical parts that come in the retail and edu kits today.
Jan 28, 2009, 12:05:00 PM

Anonymous said…
Alert! Alert!
Considering the recent sound sensor discussion, I don't see the touch sensor on ANY of these models.
I'm not saying there aren't any, just that I can't see any. I expect they're embedded somewhere.
But then again, I'm seing 3 cables coming out of the NXT on the colour sorter, and I can't see 2 of the sensors.
I also suspect that the colour sensor can read ambient light, as it's mounted on top of the rover.
Also, if they don't have the sound sensor, and presuming the colour sensor (if indeed tit is a colour sensor,: we've had no confirmation) overtakes the light sensor, then that's only 3 senors! US+Colour+Touch=3

Anonymous said…
I could use a new NXT, and a new set and possibly new software sound great. When powering three motors and three lights from motor port A, as described by Philo, I blew motor port A. The lights flashed in sequence, and the three motors ran simultaneously. One motor was an NXT motor, (which died on the first test, as descovered later,) one came with my RCX, (it powered a pnuematic pump, and ran directly off of the modified cable, and survived,) and the last one was the kind found in the RC buggy kit. (Purchased from an expansion set, powered a large sawblade-like wheel, built from an old UFO kit. It and the lights were powered by the mindsensors MTRMX-Nx.)
Jan 29, 2009, 12:03:00 AM

I believe that the "nearly unusable" biped to which Dean referred was not the new one, but the old Alpha Rex.

If that, if fact, was what Dean was referring to, then I agree with him. In my experience, the old Alpha Rex was not very sturdy nor very mobile. Maybe the new version will be a better (i.e, less complex) design. Regardless, the NXT community will come up with much more amazing designs than LEGO ever could. (Apologies to Lego).

Personally, I'll miss the extra sound sensor. That sensor has all kinds of applications for data logging, whether or not it's used for a mobile robot.
Jan 29, 2009, 2:40:00 AM

Will M said…
The color sensor is definitely different from the HiTechnic one- look at the treaded rover pic and you can see the front a bit. To be honest the set looks very clunky and, save for the awesome color sorter, not very complex or interestingf
Jan 30, 2009, 8:08:00 AM

Eric said…
One of the things that I'm sad not to see included is a new motor design. The current design is a nightmare to mount in anything other than a rover, and I feel the casing on the PF motors if far more useful. COlor senso looks good... I wonder whether LEGO will sell that separately, and if it is better than the hitechnic one.
Feb 3, 2009, 12:00:00 AM

Anonymous said…
There is a video review on the nxt 2.0 at http://www.pocket-lint.co.uk/news/news.phtml/22008/23032/lego-mindstorm-nxt-20-video.phtml which shows the nxt in action.

What is interesting is the mention that “LEGO's Mindstorm robo-kits have gone all 2.0 with three new kits due out later this year.” Do they mean that LEGO will be releasing 3 mindstorms kits? I hope so!

Anonymous said…
That video review shows the new alpha rex in motion in the promotional video on the screen in the background: and, unfortunately, it doesn't look any more mobile than it did in the original nxt set - shame, you'd have expected them to improve it in 3 years!
May 25, 2009, 8:32:00 PM

Unknown said…
I wonder if they'll ever release a NXT set that doesn't include software - I'm sure NXT-G accounts for a substantial portion of the overall price and a total waste of money for those who already have the software or use a different language, like NXC. A new design of motor would be good, as the NXT motors are awkward and have very few mounting points. Finally, is a colour sensor really necessary, as it would presumably cost significantly more than the light sensor, which suffices for most people's needs?
Jul 26, 2009, 5:27:00 AM