There were several very nice surprises in the new LEGO Education catalog. Besides WeDo, there are three gems from HiTechnic. The first is a simple touch sensor multiplexer for the NXT. 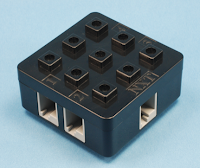 The idea is that by combining multiple touch sensor on one input port (but giving each a slightly different resistance), you can detect not only when one is pressed but which one is pressed. This was something that was commonly done with the RCX, but there hadn't been a commercial product to do it as yet for the NXT: it appears HiTechnic has stepped up and filled that gap. Four touch sensors can share a single input port on the NXT, greatly expanding the number of touch sensors you could use (at least 16; enough to build a simple keyboard, perhaps). The square "bumps" on the housing are spaced so that a studless beam nestles neatly between them, allowing you to "clamp" or "bracket" the housing in place (without going to the trouble of LEGO-certified pinholes etc.). The NXT-G block (downloadable from HiTechnic) is also well-designed, with a lot of careful thought into how to make using this sort of system as easy as possible, while still allowing the user a huge range of combinations. At $29 (without the extra touch sensors), it's not a bad price either, and you can buy it from LEGO Ed as a package with extra touch sensors for $98. One caution: this will only multiplex touch sensors, not other types.

The other interesting thing is the Tetrix system, designed to be used in FTC and based on the NXT brick. Tetrix uses metal pieces in place of some LEGO elements, but more interesting for many of us is that it uses true servos. It turns out both the servo controller

and the DC motor controller are built by HiTechnic, and can be bought individually from LEGO Ed. At $80 each (either version), these aren't cheap, but they are at least now available... and very tempting. The catalog says you can daisy-chain up to four units off a sensor port (not a motor port), and they have their own battery connections so the power

driving the DC motors and servos is not coming from the NXT, but from supplementary battery systems. Ideal for powerful motors, and this can greatly expand the number of motors potentially under control (I might end up with something like this for HALE-style, light-weight missions that still need a lot of actuators, for example). These elements do not have (to my knowledge) any NXT-G blocks for them (and they are currently sold only through LEGO Ed), but that makes sense in that FTC generally uses ROBOTC or LabVIEW or similar... and I'd be surprised if it wasn't at least possible to interface them down to NXT-G (it's all the same hardware, so at most it might be a firmware issue). Other interesting robotics products are DC motors, motor encoders, servos, LEGO "hardpoint" connectors (allowing the LEGO elements to interface with the Tetrix metal pieces), as well as lots of other hardware). Take a look.

Anonymous said…
The 'LabVIEW' disk (part number W991487) on www.legoeducation.com has the blocks for HiTechnic Servo and Motor Controllers. This is what they use for the FIRST Tech Challenge.
Jan 16, 2009, 1:59:00 AM