EDIT: You can see videos of our robot that Ken Johnson posted on the FTC blog, here. 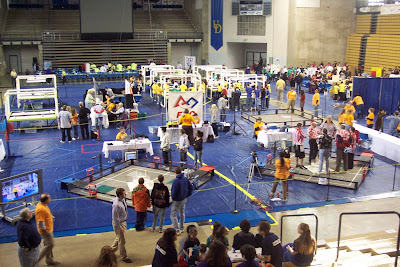 Like I posted about earlier, the FTC Delaware Regional Tournament was held on Saturday. What an exciting event! It was held in conjunction with both the FLL and JFLL Delaware State Championship, so it was a pretty major event with lots of teams and spectators.

Speaking of FLL, I was realizing at the tournament that I've now seen FLL from three totally different perspectives: as a team competing in it, as a referee, and now as an outsider looking in. It was interesting to see how vastly different these perspectives are, and it's also something that's good to keep in mind when one is refereeing or competing.
2945 Power Surge had a lot of fun competing and watching other teams compete. Our robot performed way beyond our expectations; we won all 11 of our matches, and recieved the Winning Alliance Award (equivalent to FLL's 1st Place Robot Performance) with our alliance partners 3165 Twisted Bots 2 and 7 Techbrick, and the Inspire Award (equivalent to FLL's Champion's Award). Our highest score in a single match was 213, in which we scored all of our alliance's points; no other alliance got higher than 100 points, and we broke the highest known record, 166 points. The second place alliance was composed of 134 R.A.T.S., 404 Charter Impulse, and 395 RoboAuks... congratulations to them and all the winning teams!
Here's a few pictures of the event: 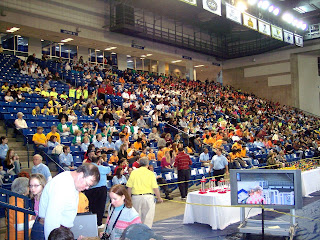 Some of the audience... there were many people there! 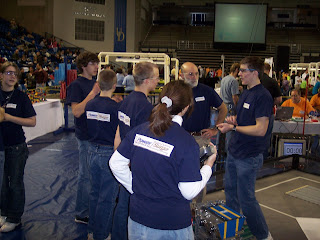 Working on the robot before the matches... we had to do a good bit of tweaking to make the robot work with the competition fields (which were somewhat different than our practice field). 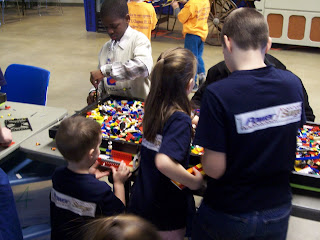 The tournament supplied a nice LEGO "brickbox" (instead of a sandbox) for the little ones to play with when they got a little bored. :-) 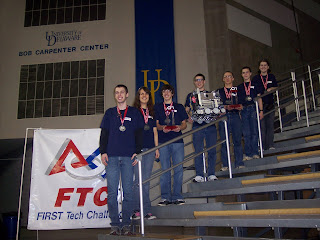 #2945 Power Surge with our robot and trophies. From left to right: Kevin, Phyllis, Chase, myself, Isaac, Timothy, and Kathleen.

The tournament was a really fun experience for us, and we're looking forward to our next regional in NJ next Saturday.

As always, you can learn more about the team at our website: http://www.teampowersurge.org/.

James Floyd Kelly (Jim) said…
Nice job - I'd love to see some closeups of your robot if and when you can share them...

Thanks! We'll be posting detailed pics/videos after the World Championships... before then, we want to be careful with our "trade secrets" since many FTC teams are ever ready to clone other team's robots if they can see how to do it.

Wow, what a coincidence... I had no idea you were there!

Anonymous said…
Congrats, Jonathan!
I had a feeling all along that you would win! I mean, considering you and your brothers were in a winning FLL team, and the other members were quite successful too, it was kinda obvious!

Anonymous said…
Also, just seen the videos now.
Your performance was amazing! The ball collecting device was awesomely done, along with the massive scissor-lift.
I didn't know that warfare was allowed! There was that brilliant bit when you rammed the opponent's vehicle. Hilarious!
Who was driving?

Thanks... yeah robot contact is allowed, as long as you don't intentionally try to flip, entangle, or break another robot. You also can't pin (immobilize) another robot for more than five seconds.

We all loved that pushing part as well... our robot is pretty heavy, so we don't need to worry about other robots blocking or pushing us around.

We have two drivers for the robot; one to move the robot around, and one to activate the various mechanisms on the robot (like the puck-retrieval flap, scissor lift, etc). I did all the "navigation" driving (moving the robot around) at the tournament, and some of the other members rotated around driving the mechanisms. During that match I was the navigation driver and Isaac was the mechanisms driver.

Anonymous said…
Do you prefer normal Lego, or the Lego-metal hybrid (what's it called?)? It's a pity FTC isn't run over here in the UK (FLL goes up to 16). However, I'm going to see if I can persuade my Dad to coach me and few friends next season. I've always wanted to! If that fails, I might see if I can do it my friend's school (I'm home-educated like you, Jonathan!).
Now get out there and win the World Championship!

Jonathan Daudelin said…
I've found that I really love working with the metal TETRIX system and with raw sheet metal (we're allowed a certain quantity of it, as well as some polycarbonate). Building with LEGOs in FLL is fun and I enjoyed it a lot, but in FTC you can modify the metal parts into the exact parts you need, with some good old hacksaws, files, drills, and heat guns. :-)

FTC was actually the main factor that made me choose to go into Mechanical Engineering in college next year, because I found how much I love the mechanical aspect of robots.