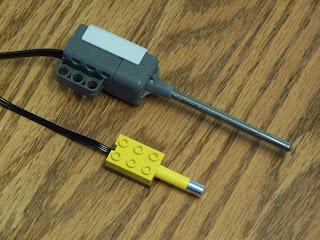 I realized I have a lot of sensors. I should really review them :).

I've been using the new NXT temperature sensor (mentioned here in the blog a while back) for a couple of projects, and decided to blog my opinion of it. Note this isn't even remotely authorized, approved, or perhaps even noticed by LEGO et. al... these are just my experience and opinions, your mileage may vary.

Both the old analog temperature sensor (product ID W979889, $38.95, although you need a conversion cable to use it with the NXT) and the newer digital temperature sensor (product ID W979749, $39.95) are available from LEGO Education (they're not normally distributed through the retail arm of LEGO). I've been using these for a number of projects, including monitoring the temperature in my house and freezer, and recently for instrumenting a model geyser (in my kitchen... yeah, it's messy around here).

The old sensor is analog - it actually put out a voltage that changed with the temperature that the NXT or RCX had to digitize, resulting in only 1024 possible temperature values. This worked fine, but it has a number of limitations: -20 to +50 °C (so it won't work in boiling water), poor accuracy at the extremes, and limited resolution (0.2° C, but the actual accuracy is somewhat less than that). Physically the sensor also has a fairly "short" safe temperature probe: 2.4 cm long, but only the last 8 mm are "sealed" in metal, so it can't extend very far into liquids. On top of this, to use it with the NXT requires the conversion cable, another (separately order) part.

The new sensor is digital: it converts the measured temperature to a number with far more precision (up to 12 bits), potentially resulting in a temperature resolution of 0.0625° C... and in addition, the with the sensor itself doing the measurement it is much more accurate across the entire range of measured temperatures. Furthermore, the new sensor has a much higher range: -40 to 125 °C (although LEGO recommends only -20 to 110 °C), not only a drastic expansion, but one that now includes the boiling point of water. And to use this new high-temperature range, physically the sensor is improved as well, with 6.4 cm of sealed metallic probe to protect the probe from liquids (more than twice as long as the older version). Both versions come with the cable integrally attached to the sensor (probably to avoid problems with using electrical connections around liquids), but the new version sports a much longer 50.5 cm cable. 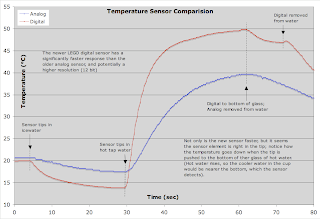 the sensors points out some other very important improvements. I put both sensors on a common mount, and dipped them into icewater, followed a short time later by dipping them in a cup of hot tap water. The results were dramatic: despite appearing larger (and therefore, perhaps, taking a longer time to reach equilibrium), the new temperature sensor responded much faster (about 5 or 6 times faster) to changes in temperature than the old version. Dipping the probe deeper into the cup of hot water (something you can't even do with the yellow one) showed another interesting fact: the actual electronic sensor seems to be at or very near the tip of the probe, allowing you to me 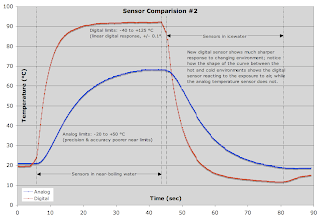 measure, for instance, how the temperature changes with depth in the cup of water, or at very specific points on a surface. A detailed look at the reported temperatures also shows the much smoother profile generated by the higher-resolution sensor, compared to the more course measurements of the previous version. Dipping the sensors into near boiling water showed the improvements even more clearly... and showed the younger sibling clearly outperforming the older time-tested version in a bath of near-boiling water.

For science teachers and others who use the NXT to record environmental variables, there's no question in my mind: the new sensor is far superior to the old one. this doesn't mean the old one is worthless (far from it), but when choosing between the two in a new purchase it's hard to find any reason to select the analog version. If pressed, I'd say the only downside of the new version is the fixed cable length - with the 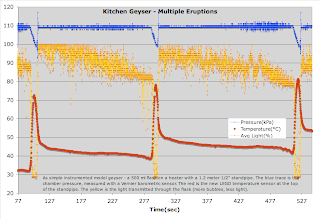 RCX sensors, you could always add another cable end-to-end to extend it, while this is very difficult with the NXT sensors (and really, may not work well over a meter in length anyway due to I2C issues). As I mentioned above, I've been studying how a geyser operates by building a small model (a meter or two tall) in my kitchen (note: I'm probably safe in saying working with explosive, boiling liquids is NOT what LEGO recommends doing with the NXT). I placed the sensor tip in the geyser outlet, where it was exposed to splashing, boiling water and live steam off and on for more than 12 hours of run time, protected only by a plastic sandwich bag over the sensor body. It handled this sort of abuse just fine, and revealed the striking regularity of the model eruptions, as well as allowing an estimate of how much hot water was discharged. This would not have been possible with the old sensor, due to both the sensor housing and the limited temperature range.

Have you checked the accuracy between 2 digital sensors? I have two of the legacy temp sensors and they usually differ by about 2F.

Kirk said…
Great review. Both sensors sound like they have their uses, and your review makes the positive and negative aspects of each quite clear. I look forward to future reviews of your other sensors.
Feb 19, 2009, 11:46:00 PM

Brian Davis said…
I resisted buying the (old) temperature sensor for a very long time. After all, it would seem there are only a few robotic applications of it. But now, especially coupled with the datalogging abilities of the NXT, those temperature sensors are a really nice addition to the suite of available sensors.
Feb 20, 2009, 1:30:00 AM

Laurens Valk said…
Very impressive again - I really like the graph that shows when there is an eruption from the geyser.

Is there a chance we can see the whole setup in your kitchen? :-)

Brian Davis said…
Yes, I'll probably document it and put it up somewhere (I already have measurements, movies, large data sets, etc... remember, I'm a physicist at heart :) ), I'm just not sure where to put it up (after all, this is really a simple geology or physics model... LEGO is related only because, yet again, it's an amazingly quick and easy way to instrument something like this).
Feb 21, 2009, 1:50:00 AM

Unknown said…
Hi, I am really new to the Mindstorms I have just bought a set.

Does this mean the analog signal from the sensor element (probably an NTC thermistor correct me if I am wrong) is converted to digital signal in the sensor housing and than sent to the NXT?
Feb 21, 2009, 9:48:00 PM