Yesterday I started a new series of posts on creating a NXT motor Grader. In part 2 today I like to continue where I left off: designing the steering and wheel lean.
The wheel lean is an important feature of the motor grader that sets it apart from other construction vehicles:

Unlike some vehicle that uses wheel-lean to steer the vehicle (e.g. the Dodge Tomahawk), the wheel lean is used to aid the operator achieve a perfect grading finish: when the blade is at an angle, it helps keeping the grader pulling in a straight line. The top of the front wheels are normally leaned in the direction that material comes off the moldboard. You can find out more from this site [Thanks to John Brost for the link].
video:

[And please remember to press the new HQ button on the YouTube video to watch the video in high definition.]
The Design process:
My first attempt at creating the wheel lean used two PF motors and linear actuators and a single NXT servo motor in the middle for steering:
The PF motors were powered by a separate PF supply and contolled from the NXT by an IR-Link. An array of 4 IR receivers were placed infront of the IR-Link which commanded the motors based on the signal sent by the IR-Link for each of the four channels. The IR-Link and the remote receivers were then covered to stop the interfereence from sun light. 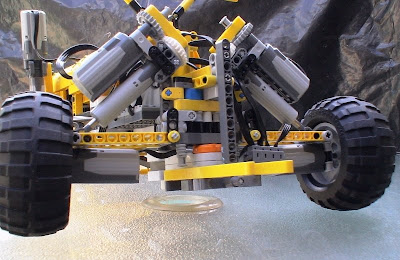 Two additional PF motors provided power to the two front wheels. With the new PF block for the IR-Lik, one can vary the power between left and right during steering - giving excellent control over the turning circle.
And although it looked elegant, I had got the pivot point wrong - so instead of leaning just the wheel it raised and lowered the vehicle instead! (see video above). I also made the wheels powered - just like the top of the range graders. However, the powered front wheels made accurate steering very hard.
My second attempt used some of the new components that shipped with some of the new 2009 TECHNIC models - namely the wheel braces. However, I removed the front wheel drive motors as it impacted the steering accuracy. And talking of accuracy - I replaced the PF motors + clutch with NXT servo motor (with built in rotation sensors) - so I have fine control over the lean of the two wheels: 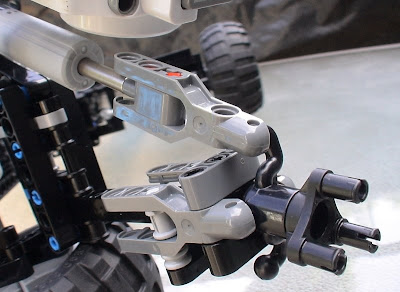 The finished design worked beautifully achieving 45 degrees lean either way. The leaning had an impact on the turning circle - making it smaller (see video above):

Boris Tarasov said…
hi
can you guide me what kind of device to remote commands to motors you are using on model? As I cannot see controller on board?
Mar 13, 2009, 5:42:00 AM

BlueToothKiwi said…
Thanks Boris for your question.
- The fist attempt (the yellow prototype) had a White NXT and an IR-Link. I had a NXT program running on the NXT controller that controlled the motors. I also had a PF remote that came with the PF motor to override the NXT-G during filming.
- The second black model is controlled by a simple NXT-G program runing on a Black NXT - but in Part 5 of this series I will talk about creating a custom dual joystick using another NXT - with many of the functionality the real Grader control panel has.
Mar 13, 2009, 6:27:00 AM

Unknown said…
Good job on getting all of those motors in there, but it seems that it shouldn't be that complicated, couldn't you just connect the two sides and use one motor to control them, like a vertical rack and pinion system?

Boris Tarasov said…
Hi one more time
I have a lot of questions.
1. do PF remote comes with this package? http://shop.lego.com/ByCategory/Product.aspx?p=8293&cn=373
2. it is possible to have a micro controller outside of the model and control motors remotely via IR:
exemple-- White NXT send some commands via IR to receiver that is actually is on-board having some equpment that powers motors and response to receiver commands?
Mar 13, 2009, 9:57:00 AM

BlueToothKiwi said…
Rick-Sam: You are right - it is possible to do that - however, the all-wheel-drive Graders have steering compensation that puts different amount of power between left and right during turning: It is pretty similar to Ackerman correction they have in normal vehicles where during the turn the outer wheels get (say) 30% more power than the inner wheel so it can turn in a tighter turning circle. I hope this helps.
Mar 13, 2009, 11:32:00 AM

Unknown said…
Thanks for the reply, I guess I've never seen an all wheel drive machine before.

BlueToothKiwi said…
Boris:
(1) I am afraid not. the Power Function motor set does not contain a receiver. But you can get it separate here.

(2) Yes you can do that. You need to be careful about the range (about 4 meters) and ensure you have line of site between the IR-Link and the IR receiver. The other thing to watch for is to shield the receiver from ambient heat sources (e.g. sunlight) that may interfere with the signal.