Continuing on with the series of posts on creating a NXT motor Grader I started last week ... Today we are going to look at lighting. This is an important part of the NXT robot design that often gets overlooked. 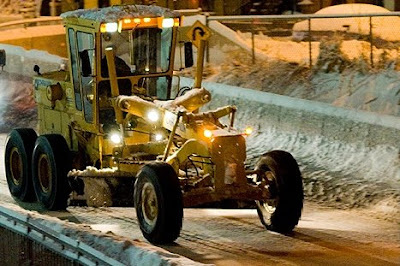 Motor graders are often used in winter to clear snow - so lighting is very important. I tried to create the large floodlight the big Cat graders have: 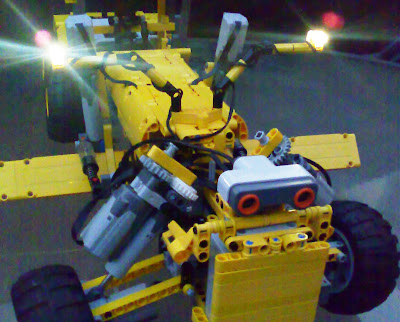 When I started the project I was not sure what sort of lights to use - some are easier to use with NXT. Some are so bulky it simply does not go with the model.
My first attempt used the LEGO lights that comes with the NXT Education version: 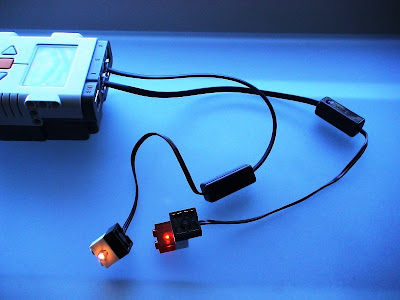 They are easy to interface (using the cable that comes with the kit) and can be programmed using the NXT-G Motor block. However, I did not like the studded pieces so I discarded the design.
The next lights I tried was the PF lights that came with the new LEGO TECHNIC off roader. The lights were very elegant and fitted neatly inside the standard hole. It was perfect. However I was not sure how best to interface to NXT. First I tried connecting it directly using the adopter: 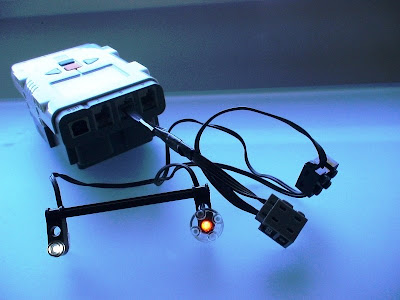 The disadvantage of this is that I loose one NXT port - which was not acceptable.
So I used the PF power supply for the power - given that there was a PF supply already in my grader design (see last part).  The IR-Link allowed the NXT to control the light and the brightness programatically: 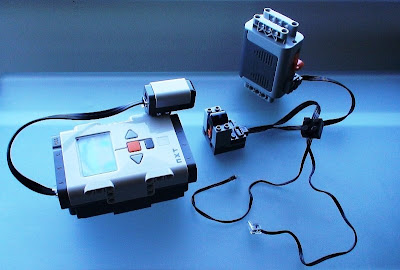 Programming the light was easy using the new PF-block availabe free from HiTechnic. I wanted to create the way the floodlights on the big graders turn on and off - the large flood light take about 2 seconds to become really bright:

The simple loop allows the brightness to gradually be increased to full level in a loop.
Following the comments from the last part, I am going to add some additional links below: If you want more details of interfacing Power Function (PF) hardware to NXT or using IR-Link with PF hardware please check out the following posts I done in the past:
Working with PF - Part 1 (TheNXTStep Blog)
Working with PF - Part 2 (TheNXTStep Blog)
How to integrate PF with NXT (BrickJournal)
BlueToothKiwi
Labels: BlueToothKiwi construction IR-Link Motor Grader MotorGrader PF Lights

Brian Davis said…
That's a nice idea for gradually increasing the light level, but you might be able to get away with a more compact solution. Put a IRLink block and a Wait for 0.25 seconds block inside a Loop set to count to 8, and check the "show counter" checkbox. Wire the counter into the Motor A level plug, and you'll get a series of 8 calls to the IRLink block, each with an increasing power, slowly ramping the lights on over about 2 seconds.
Mar 19, 2009, 9:14:00 PM

James Floyd Kelly (Jim) said…
This is good stuff... great work. I really like the real-world machine being examined to see how it can be duplicated with Technic and NXT.

BlueToothKiwi said…
Jim: Thank you for the kind words. Next week we will look at the most important part - the Grader blade or Mould board. I am still working on it right now.
Mar 20, 2009, 2:12:00 AM

BlueToothKiwi said…
William: Thank you for the suggestion. Black is nice - but if you look at the real new M series Cat graders, they are a mixture of Black and Yellow. I will use the Black NXT - that is a great idea.
Mar 20, 2009, 2:14:00 AM