Last month I blogged about the new Black NXT that LEGO just launched in USA and Canada. If you are lucky enough to live in North America, you can still order them - there are still a few left from the Limited Edition run of 1998 units.
I got mine recently - and I decided to build the Bike from the One Kit Wonders book: 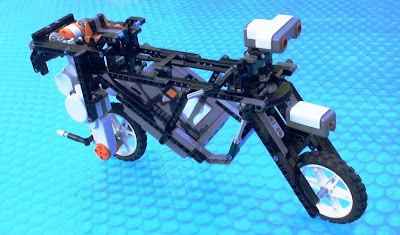 I used black pieces instead of the white and grey pieces that comes with the standard NXT kit. The black bike looked stunning. I thought it will be cool to have the Black bike and the white bike running at the same time.  More to follow:
The NXT bike can be built with pieces from a single NXT  (Retail) kit. 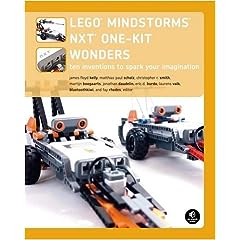 Building instructions for the bike can be  found on last chapter of the LEGO MINDSTORMS One Kit Wonders book that was published a few months ago..
The book also has 9 other really cool models - some of them written by contributors to this blog including Jim, Chris, Matthias, Martyn, Jonathon, Eric, Laurens, and myself. You can get the book from here.
If you want a preview of the Bike building instructions, check out this link.
Bike chapter preview
Back to the Black bike: Here is a video of a Black NXT bike and a white NXT bike riding autonomously and avoiding each other. To make it more interesting, I decided to shoot the video inside the pool - albeit on the pool cover - which meant the only think separating the precious NXT models and the water was a 1 mm thick bubble wrap floating on the water!
During the filming, the inevitable happens - you can see one of the two bikes getting wet at the end of the video!


Edit: I first posted this early in the week - but took it off immediately as it had an HTML error - which is now fixed.
Labels: Black NXT book NXT Bike One Kit Wonders

Thomas Sheppard said…
I have the book and several others from people on this blog. I highly recommend them.

You are brave racing the bikes on a solar blanket atop a pool. That's confidence.

Unknown said…
Hi, I droped one of my NXT motors in my pool before. I was trying to build a boat, and the motor fell. Thankfully the wire caught it before it completley sank to the bottom! Whew!

I will try to create some additional content for the bike (on how to extend it) over the Easter holidays and post it in the Book download section (time permitting).

BlueToothKiwi said…
Thanks for the comment Jojoguy. It is not recommended - however I am pretty amazed how the NXT motors and PF motors still survive after the odd H2O exposure.

LEGOmom said…
Those bikes convinced me to buy the book! I can't wait for it to arrive!