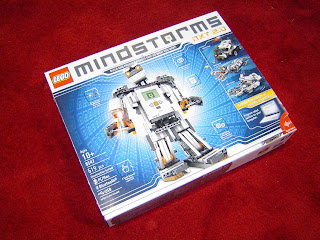 While at WorldFest, the 2.0 kit box was being shown around... eye catching colors and graphics. Our very own Laurens has his name and a robot he built using the kit's parts featured on the back of the box (a little hard to see in the photo, but in lower middle area of box).

The Betarex (is that the right name?) seems to be an improvement over the Alpharex... but the poor fellow had his new Color Sensor "borrowed" early in the event... fortunately LEGO brought a replacement and he was repaired. 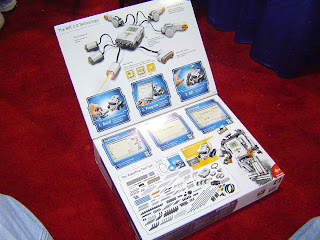 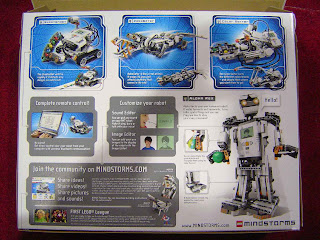 megamindstorm101 said…
wow image and sound control cool. No more needing to make custom pictures or custom sound with some other program. The robots are great and laurens (the one that looks like johnny 5? or the one under it...both are cool :P) is awsome. I like the new alpha rex and the color sensor is definately an improvemnet from like regular light sensor.
Apr 22, 2009, 8:15:00 AM

Génération Robots said…
How a company such as Lego can do something like that ? There is no more NXT 1.0 available on the market and the NXT 2.0 kit won't be available before september (at least !!). If it was for a really improved robot that make the previous one unsaleable, I could have understood but as you said, there nothing revolutionary in the NXT 2.0 kit.
Lego won't be the Apple of the robotics for sure...
Jun 5, 2009, 12:21:00 AM