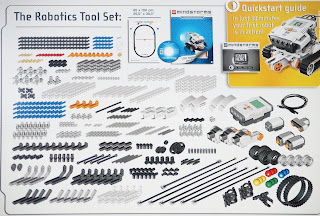 This is the parts list inventory of the new set. Notice that the set also includes 4 wheels with tyres, even though the latter parts are not used in any of the set models.
The box includes more smaller beams than the old set, and the amount of length-15 beams is reduced to 2. However, you get a lot of other useful beams in return. Apart from new parts, some of the older parts have a different color. Here's a more detailed picture of the back side of the box. Two new features of the software are shown here: Remote control (USB or BlueTooth) and the possibility to create custom sounds and image files for the NXT.

The box also promises 10 models with downloadable building instructions from mindstorms.com upon the set's release. Two of the models are shown here. One of them is a six legged Mantis, and the other one is a cool transforming robot. 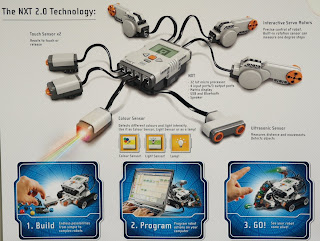 This image is not very new, but it shows the color sensor functionality, with three separate functions:
- It can be used in Color Sensor Mode. Using the standard software, it can detect six color: black, white, red, green, blue and yellow
- It can be used in Lamp mode: It is possible to control the colored LED on the sensor, by setting it to either green, red or blue. In this mode, the light intensity would be just around the same brightness of the old Light Sensor.
- It can be used in Light Sensor Mode. In this mode, it acts just like the old light sensor: it returns a value from 0-100 where 0 is darkest, and 100 is brightest. In this mode, it is also possible to pick a desired LED color (again, red, blue or green).

megamindstorm101 said…
jmdp is awsome :P and finnaly some clear pictures the other pictures i rememebr seening wernt so clear. Also i finnaly got an answer to my question that the light sensor does indeed work as a regular light sensor :) I cant wait though only 2 15u beams are kinda annoying good thing i have some already from i other lego sets :)
Jun 20, 2009, 8:52:00 AM

NickNackGus said…
I'm assuming that, by rapidly swapping between the red, blue, and green LEDs on the color sensor, you can create a very limited "pixel" for either a large display or just lighting up a single object.

I have used this idea to generate grayscale images on the NXT screen previously, and all I had to do was make 101 ric files (0-100%) containing the same image at different contrast levels. (Thanks to NXTRICEdit v1.0, an image, and the contrast slider.) Thanks to NXTRICEdit v2.0, I can compress this to one ric file with a single parameter.
Jun 21, 2009, 10:01:00 AM

LEGOmom said…
I hope someone does a parts inventory like there is for the older kit. Please make a 2.0 conversion kit for Jim's new Nxt2.0 book! Pretty please!

PBR said…
Question for you:

Does the NXT 2.0 have a newer version of the NXT-G software? Or, is it the same as in the original NXT?

Laurens Valk said…
Mega,
I've built a lot of models with the kit, and so far I have not had much problems with the lack of 15L beams. You get enough 13L beams to build something.

There aren't so much gears in the set, so one will have to collect these from other sets, or find creative solutions to avoid the use or gears.

Tim,
In Color Sensor mode, the led indeed changes very rapidly, but in this mode, the LED shines at low intensity, so you can hardly see light coming from the sensor. For a pixel, this might be a problem. In the standard software it is not possible to change the frequenty of the change and such things.

You can indeed change the LED color in Lamp and Light Sensor mode, and the LED is very bright in this situation also. However, in the current firmware (1.28) the change is relatively slow. So creating a mixed color is not possible here either.

GJ,
When used in Light Sensor Mode, it works just like the old Light Sensor, and you can even pick your LED color.

LEGOmom,
I'm quite sure part list inventories will soon show up. I'm also writing a NXT 2.0 book for kids, so I'll probably be creating a inventory list some time.

If such parts pack would be created, it would be nice to make it work for all NXT2.0 books. LEGO (retail) won't be releasing such a kit. It would be the question what the set should contain. A color sensor, an extra touch sensor and the software might make it an expensive pack.

pbr,
Yes, there is a NXT-G 2.0. Note that this is very different from the earlier released NXT-G 2.0 education version.

It doesn't have datalog support, but it does have some additions to the 1.0 software, such as the ones mentioned on the picture of the box. Also, it now deals with floating point values instead of integers.


All,
Let me know if I missed any questions!

NickNackGus said…
I'm pretty sure you failed to understand my question. I mean to, in the code, tell the color sensor to rapidly change between red light active, blue light active, green light active, and ambient light. As a test using the light sensor from 1.0, try something like this (in pseudo code, “.” means indent):

That is true, but I meant to say that changing the LED color takes much time, under the current firmware. So, I'm not sure if your would work.

If anyone here likes strange time-lapse photography and the NXT, and is thinking about getting the color sensor, good luck with my idea. Creating a full HD television and recording a full 30 minute show should take a few weeks, and work pretty well as a strange, silent film.

Pe-ads said…
This looks very cool. The lack of cogs/gears is annoying, but I already have plenty. I'm really looking forward to the new colour sensor and the new software. Floating-point digits makes it so much better. Perhaps 3.0 will have Pi as well! :-P
Pe-ads
Jun 24, 2009, 3:10:00 AM

Unknown said…
I have recently acquired (for free from a friend) the old Mindstorms system 2.0.

Will the brick, cogs etc work witht the NTX 2.0?