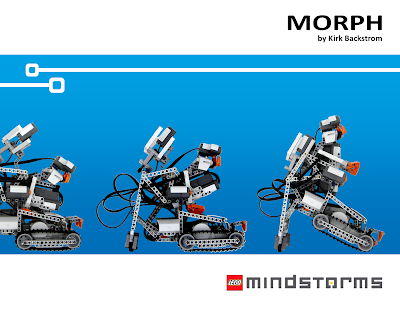 I would like to introduce you to MORPH, one of the bonus robots that are featured on the back of the LEGO MINDSTORMS NXT 2.0 box. MORPH stands for Martian Observation Rover & Personable Humanoid. He is a transforming robot that transforms from a rover to a humanoid, and can dectect colours (with the new colour sensor), which tell him to perform special actions.
He was recently featured on the LEGO MINDSTORMS News page, along with his creator (me). There you can download instructions for how to build him, a NXT-G program to control him, a video demonstrating his functions, and the story behind the creation. I had a lot of fun designing him, but more about that in another post.
I hope that you have a lot of fun with this model!
Happy building.
PS: Keep watch for other bonus models to be released created by members of the MINDSTORMS Community Partners team.
Labels: Bonus Model MORPH NXT 2.0 Transforming Robot

johnmrichey said…
the link for the program file is bad.

Unknown said…
Please, I need the correct program for the bot