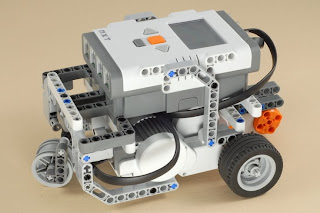 I recently posted an NXT 2.0 version of the 3-Motor Chassis design from nxtprograms.com (the NXT 1.0 version is here). This is a vehicle base that includes the third motor mounted low for mounting various motorized attachments, and a pivoting castor wheel to allow it to turn easily on both carpet and hard floors. The treads included with NXT 2.0 are one way to build a robot that can turn on all surfaces, a castor wheel is another, which will generally drive and turn faster than a treaded robot.

This is just a robot base (I will post some more interesting models using it soon), but some may find it useful as a starting point for their own robots.

In addition to the necessary redesign for the different wheel sizes and parts mix in NXT 2.0 vs. NXT 1.0, I added a couple of improvements over the 1.0 version: It will fit either AA batteries or the rechargeable battery pack, and a simple design variation is included to allow you to lock the castor wheel in place so that it will not pivot. This provides an easy way to experiment with the pros and cons of a pivoting castor vs. a straight plastic third wheel that slides while turning, as shown in the following video:

Alex said…
I have used your chassis here for a number of projects, and it has been used two seasons by an FLL team I am a coach for.

Thank you for the design! It is a compact, sturdy, flexible, and maneuverable platform for developing projects that need a reliable drive base.

Also, if you need a light sensor in any of your own projects (or for anyone else considering this chassis), note that there is a great spot to put a light sensor on the underbelly of this chassis. You can't pin it in two points, not quite enough space, but the space is so close to the right size the light sensor stays in place well.

Being mounted under the robot does a good job of naturally shading ambient light as well.