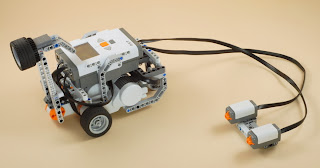 This Hammer Car project for NXT 2.0 extends the 3-Motor Chassis design to add a swinging hammer weapon up front, and extends the 2-Button Remote Control program to add wired remote control for the hammer (as well as a fun laughing sound) from the same two buttons that control the driving and steering. In order to squeeze 6 operations (left, right, forward, stop, hammer, laugh) out of only two buttons, timers are used to distinguish the difference between a button being pressed and held down vs. quickly tapped, as shown in this video:

I posted an NXT 1.0 Hammer Car project about a year ago that used only one touch sensor for the remote control. It used a similar timing trick, but was significantly harder to maneuver due to having only one button control.
Labels: hammer car NXT 2.0 nxtprograms.com remote control touch sensor