The NXT Robotics Workshops which I held several weeks ago went very well. Overall 9 children from the ages of 9-13 attended the workshops. Each workshop covered the basics of using the NXT, and by the end of the course the students were able to design, build, and program their own robots to complete a challenge involving retrieval and delivery of objects. The students all had a great time; one boy told me it was the best class he had ever attended! It was nice to see how excited the children were about learning how to create real robots. Some comments:

- Instruction/Lecture Time: For building, I found that much instruction wasn't required. It seemed that the best way for the students to learn how to build was to get lots of practice while I provided tips and helped them when they got stuck. First I had the students build robots with instructions - this seems to be a good way to get them used to the building system without giving overwhelming them with having to come up with their own design. Then I gradually moved them into building their own simple rovers, and at the end of the course had them build their own robots to complete a challenge. For programming, there was significantly more instruction needed. Many of the programming concepts were hard to grasp fully, so there was a lot of review as well as initial instruction.

- Student interest and satisfaction: Wow... fully exceeded all my expectations. All the students loved the workshop, and the parents were thrilled at what they were learning. Most of the students who didn't yet have an NXT expressed their desire to save up and get one or to ask their parents to get one for them. I should have charged LEGO an advertising fee. :)

- Total working time: The workshops involved quite a bit of time on my part, both in preparing them and running them. I spent several days preparing a general syllabus, and I also spent a good amount of time before and after each class preparing for and cleaning up from it

- At the beginning of the first day, the students played an ice-breaker game in which they simulated robots and programmers. One member of each team was the "robot", and the other member was the "programmer". I had an obstacle course set up with a table that had yellow and blue pieces of paper on it. The programmers had to make up a list of instructions to guide their "robots" through the obstacle course to touch the blue piece of paper but not the yellow piece. The "robots" were blindfolded and didn't know what goal they were supposed to accomplish, and then followed the "programmer"'s instructions to complete the challenge. It was a fun way to illustrate the way robots work and the fact that they only know and do what the programmer tells them to do.

Here are some pictures of the workshops: 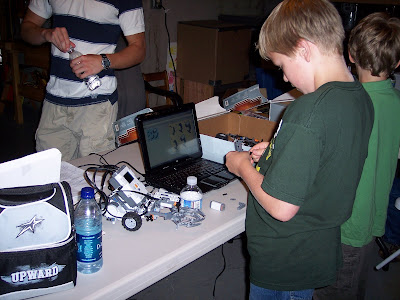 The students first built Tribot and its attachments using instructions. Although I didn't time exactly how long it took them, LEGO's claim of 30 minutes to build the starter model seemed pretty reasonable. 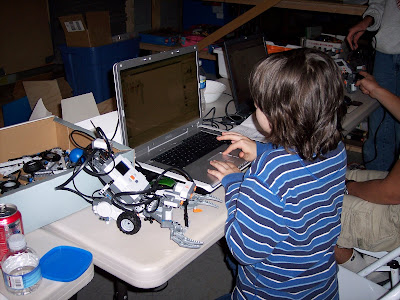 The students did lots of programming throughout the course. They started by making simple programs with my help, and built up to making more complex programs without needing much help. 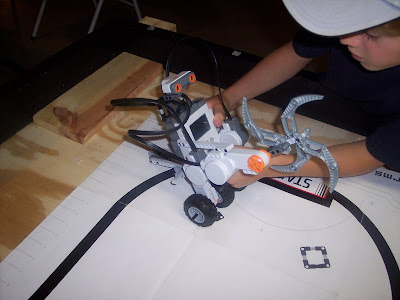 The children had lots of fun creating their own robots, and there was much interest in making robots with weapons. This one had spinning blades. 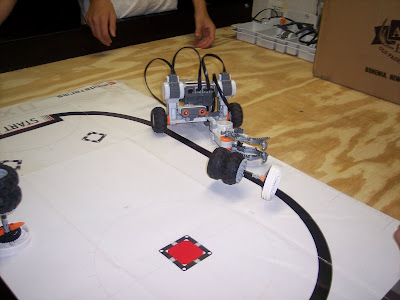 The final challenge required the students to create a robot that could retrieve two towers and deliver them to a target circle on the NXT test pad. This particular robot used an Ultrasonic sensor to find the towers and had a motorized grabber arm to retrieve and deliver them.

Armagon said…
That's awesome. How long were the classes, and how many did you run? I'm hoping to run an after-school course somewhat akin to that this fall; I was contemplating teaching "Scratch" beforehand to aid the students with learning programming (and still undecided if it should be two course or one long course).

LEGOmom said…
Jonathan - thanks for a great writeup! I was hoping you would. Can we open this up for discussion, perhaps at the NXT BLog forums? I would like to do this as well but I don't have the background that Jonathan does w/ NXT. I'm just a mom learning w/ my boys. But there is NOTHING like this where we live and I know folks would be interested.

LEGOmom, are you referring to our NXT Step forums? If so, feel free to start a topic on it.

LEGOmom said…
I started a thread under the General Forum at the NXT Step forums for discussing setting up NXT workshops. Please drop by!