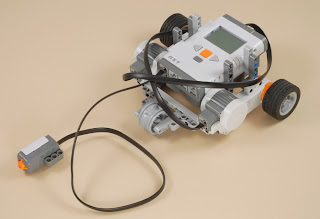 FLL season is upon us again, so I decided to post a tool that FLL teams (and other NXT users) may find useful. This Path Measurer project for NXT 1.0 and for NXT 2.0 gives you an easy way to plot and measure a path for your NXT to travel, so that you can quickly determine how many degrees to use as the duration for your Move and Motor blocks, for the portions of your navigation that use "dead reckoning".

Hopefully this will save teams some time on this more tedious task and give them more time to spend on something else, like learning how to use sensors. As most teams knows, the degrees needed for segment durations depends on the actual robot used (wheel diameter and spacing, etc.), so it is best to determine this by experimenting with your actual robot.

Mechanically, the Path Measurer is just a touch sensor on a wire, which you can hook up to your robot (any robot using the normal 2-motor drive) and use it as a wired remote control to guide the movement of the robot by remote control when you are measuring the path using the programs provided. You select the type of movement for each segment of your path using the NXT buttons, then press and hold the touch sensor to drive in that direction. The NXT screen will read out the degrees travelled by the motors for that segment, which you can then record and have your teammate type into the configuration panels of your Move and Motor blocks of your autonomous program. This should be much faster and more accurate than rolling the robot by hand and using the View Motor Degrees feature of the NXT (or just using trial and error).

The NXT 1.0 and NXT 2.0 versions are essentially identical, except that the 2.0 version uses the newer Rotation Sensor blocks, which behave slightly differently: In 2.0, a rotation sensor will report negative degrees for "backward" movement, whereas in 1.0 you get positive degrees in both directions.
Labels: dead reckoning degrees FLL nxtprograms.com path measurer