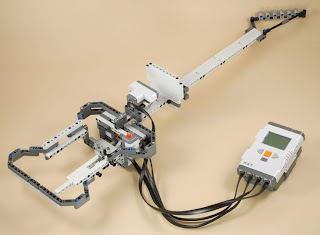 It is finally here on nxtprograms.com, after squeezing in bits of spare time throughtout the school and FLL season and other projects: The NXT Guitar Challenge Game! This project is a "Guitar Hero"-like game for your NXT that requires only a single NXT kit. Using a guitar controller built with a single NXT kit, you are challenged to play a series of "notes" that scroll towards you on the NXT screen while listening to the song. You select the correct note by sliding a plate on the neck of the guitar that is seen by the ultrasonic sensor, and then strum the note using a lever that triggers one or two touch sensors. The game counts your hit and missed notes and displays your score at the end of the song. And unlike other Guitar games, the music plays externally on your iPod or stereo, so you can listen to the real recording on your own sound system while playing along, and you can also author/record your own favorite songs and play along with the real recordings that you already own. You control the choice of music and the difficulty of the game recording! Also included is a "Free Play" mode, where the guitar converts to an all-in-one self-contained instrument that you can play like a stand-alone guitar using 8 notes from the rock/blues scale. In this mode, the guitar is an upgraded version of the original Electric Guitar project, now including a fun "whammy bar" to bend tones (uses the light sensor as a high sensitivity distance sensor), and a convenient touch-sensor strum lever. 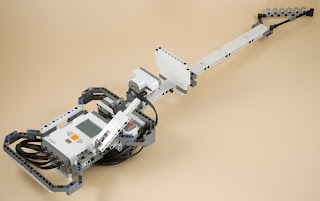 Back to the Game Mode, the free version of the game on the web includes the ability to play the game and record your own songs on the NXT, and 7 sample songs. An enhanced version of the game on the new CD 65 Fun Projects for your LEGO MINDSTORMS NXT allows full authoring and editing of songs on your Windows-based PC using a custom graphical editor. In the PC editor, you simply press keys on the keyboard while listenting to the music to "record" a song, then you can go back and edit/tweak it with the keyboard and mouse. 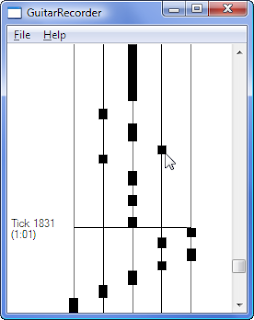 Building instructions are currently posted for NXT 1.0. I also have an NXT 2.0 version built and will post instructions for that as soon as I have time. I will also post a new video when I get a chance, for now here is a link to the preview video posted earlier.
Labels: game guitar Guitar Hero NXC nxtprograms.com

Dave Parker said…
I should clarify there are five programs for this project:

4. NXT Song Recorder program (NXC), on the web, source code on the CD

Dave Parker said…
A few people seem confused about the fact that the NXT itself doesn't actually play the music (the game is designed to syncronize with external music playing on your own sound system). I have clarified this a bit more in the instructions (thanks for the feedback), but I think I also neglected to note some of the basic "why" points in my blog post here, so let me try to clarify:

1. The NXT is not capable of much at all music-wise for sound. You can play tones, but they are not fun to listen to. You can play sampled sounds, but only very low quality and only a few seconds in the available memory, so the NXT is not up to the task of playing the music itself.

2. Sadly, due to copyright restrictions, I cannot provide free MP3 downloads that go along with the sample game songs.

3. Despite restrictions 1 and 2, the game takes a different twist than Guitar Hero and the like that can make it fun in a different way (with the right outlook, we're talking a hobby do-it-yourself kit here...). You can choose and "record" your own music (that you already like and already own), then try to play along with it. Nevermind that it's hard at first, and the music notes don't look realistic, just whack something out and then try to play it back while listening to your music!

4. Although I give almost everything away for free, part of this game (the optional PC editor) is only on the CD. Aside from being a "thank you" to the people who buy the CD, there is a practical reason too. Although I am happy to provide free software, there is a "support" burden for all software, especially the more complex stuff. Putting the more complex parts on the CD decreases my support time on this stuff to fewer people, thus leaving me more time to make more free projects in the future...
Dec 3, 2009, 1:14:00 AM