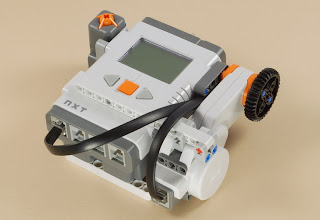 I have posted an NXT 2.0 Dial Remote Control project, which is an updated version of the NXT 1.0 version posted last year. This is a simple-to-build and sturdy remote control designed for NXT-to-NXT Bluetooth control, which has a somewhat unique feature in that you can get very smooth and progressive movements based on the way that the dial control works (the speed of the dial rotation maps to the robot motor speed instead of the usual dial/lever position technique). This control works particularly well to control the Forklift project.

In addition to the Bluetooth programs (one for the remote and one for the controlled bot), the project includes a program that shows how you can use the Dial Remote Control to control two motors via wires, with only a single NXT kit. Along these lines (wired remote control), I also posted a separate Mini Rover with 3-Button Remote project that shows a much simpler wired remote program using only the 3 buttons on the NXT.

To throw in something new for the Dial Remote Control over the 1.0 version, I added a touch sensor to give you five total actions to choose from, and also a bar to prevent you from accidentally pressing the dark gray program abort button by mistake when using the remote.

The NXT 2.0 Dial Remote Control is similar enough to the 1.0 version that I didn't make a new video, but here is a video of the 1.0 version controlling the 1.0 Forklift project.
Labels: Bluetooth dial NXT 2.0 nxtprograms.com remote control