This weekend, I've built the last model from Fay Rhodes' "LEGO® MINDSTORMS NXT Robots Alive! Endangered Species" book: the Sloth which is capable of layawaying on a branch. 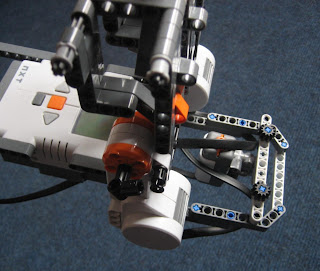 You can find a movie on it, filmed by Rick Rhodes, here.

Like the other animals from Fay's book , also the NXT Sloth is a both exceptional as well as entertaining robot.

After having worked through the complete book now, I can draw the conclusion that all the five models reflect Fay's particular skill in mimicking the physique and the motion patterns of real-world animals with LEGO® MINDSTORMS NXT. Apart from some minor things (which mostly are adressed already on the accompanying web site) I was able to follow the elaborate and well commented building and programming instructions without any problem.

Because of the appealing models, the well adapted level of difficulty, the particular topic, the extensibility of the robots (of which Fay proposes some in the appendix) and the didactic part at the end of the book,  "Endangered Species" in my opinion is a very good choice both for parents who are in search of a book for their child accompanying the newly bought NXT 2.0 set as well as for teachers who are looking for a guide to their robotic classes.
Labels: book Endangered Species Book Fay Rhodes