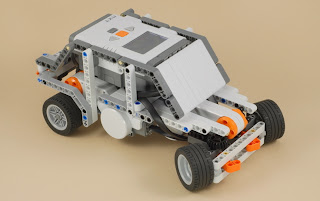 I have posted a new Race Car design for NXT 2.0 and three remote control strategies to go along with it. This project was designed to look like a real car, steer like a car with pivoting front wheels, and go fast. It works best with remote control, but you can't control it with the built-in NXT 2.0 software remote control because of the way the steering works (nor very easily with the "nxt-remote" program), so I also posted three NXT-based remote control stategies: one wired, and two Bluetooth from a second NXT.

Now I know that a remote controlled car is not exactly the most original thing you can do with an NXT set, but at some point you need to do one... This was actually one of the first designs I did with the NXT 2.0 set when it came out because the parts selection was screaming out "car" to me with the new car-like tires, but I am just now getting around to finishing it off and posting it.

The 5 Button Remote Control (Bluetooth) was actually designed by my son. We were playing "Battle Bots" in our Robotics Club, and we kept finding that a LEGO remote control of any complexity when in the hands of a kid in the heat of battle will end up coming apart somehow. So I challanged the kids to come up with a remote design that was sturdy enough to not come apart, but still allowed decent control of driving and a weapon/action at the same time. This "5 button" design is so simple that you can build it under 1 minute, but it is super sturdy, and the controls are positioned so that you can use both the finger and thumb buttons at the same time. My son would also like to point out that it has Wii-style wrist safety straps as well :-)

The Steering Remote Control (Bluetooth) is mechanically similar to my earlier Dial Remote Control but puts the control wheel horizontal so that it feels and acts like a steering wheel, which is good for the Race Car and similar things, and I rearranged the ergonomics a bit. And the control strategy is different.

If you are not a fan of remote control, the Race Car can also do some simple autonomous tasks with the color sensor mounted underneath, although the car-like steering does not allow very tight or precise turning.

Here is a video of the Race Car using all the different control stratgies:

Andy D said…
Very, very nice. Another winner! I need to find some time to experiment with it. The different Bluetooth remote options are interesting. I've been thinking about a steering option using a NXT servo (motor) now I can examine yours. Thanks!
Mar 26, 2010, 12:52:00 AM

megamindstorm101 said…
I love how fast it is and how well it is built. I dont know how you do it but you really can build some amazing stuff. If I get an nxt 2.0 sometime this is something I will definately build.
Apr 9, 2010, 2:26:00 PM