Skip to main content
Labels
Posted by Brian Davis May 27, 2010 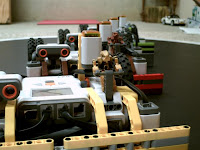 Some creations cry out out to you. They look so fun that it's hard not to bemoan the fact that 99% of them you will only ever see "virtually", on a web page, YouTube, or similar. Steve Hassenplug created a competitive robotic games that's a mash-up of the RoboRally boardgame and conventional robotic sumo, and it's been a hit everywhere it goes. The idea of robotic sumo is simple - your robot must defeat the opponent by incapacitating it or pushing it out of the ring. But that requires a lot of mechanical design, programming complexity, and testing. The idea of PSumo is to remove some of those hurdles, while preserving most of the fun. Instead of building a custom sumo robot, you build two identical ones. Instead of laboriously programming them, you swipe a series of "programming cards" over a sensor on the robot before the match begins - it's your selection of programming cards that determines how the robot will behave during the match.

I've had a lot of demand for some of my creations - but evidently Steve's had a little bit more for this one. In fact, he's put together a PSumo "kit" ($240) that has much of what you need to add to a standard NXT kit, together with instructions, software, etc., to produce your own copy of his PSumo game. Note this doesn't have everything - but it does have the harder-to-get components, as well as the instructions to make it all work together.

If you haven't seen this before, I'd recommend visiting Steve's PSumo page to at least take a look at what it is. It's not just an impressive feat of programming and building - but it's a really educational example of "packaging". While all the parts are there to experiment with and change any way you like, just like with LEGO in general, here's an example that does something, and does that something well, and is entertaining at the same time. In short, it's a good example of what a LEGO robotics project can be... for everyone (not just the builder).
Labels: PSumo Steve Hassenplug