Arno, A.K.A. “legoasimo” is working on a Biped that reminds me of the Bioloid. The monster MOC is controlled by three NXTs running NXC tethered out of sight. He has filled this bot with fourteen motors and ten sensors and done a spectacular job cramming it all into a small package.

The robot shifts his weight using its upper body weight along with its arms, which gives it a natural anthropomorphic look. Arno tells me that he is done building the robot, but plans to keep working on the software to make it walk. This video is basically a “proof of concept” and I think he has proven his concept will work quite nicely. He also tells me that there will be more videos, so stayed tuned. 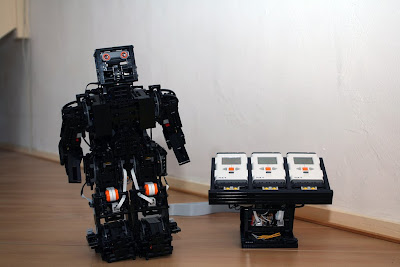 You can see more pictures at his flickr site.
Labels: Biped