So there's been something in the works for Brickworld for some time now, and I thought I'd share it here (because, (a) I really want to, and (b) not everybody can make it to Brickworld, where it will be displayed). Steve Hassenplug has been working with a large group of folks to make a rather... big... robotic game. Tic-Tac-Toe & Connect-Four were impressive, but in the interest of something off the supersize menu, I give you...

The idea is sim 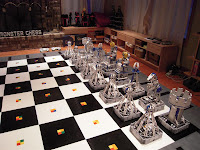 ple - a chess game where you can play against the computer. But the implementation here is what's truely monster about it. Each piece is its own autonomous robot, and there are actually a couple of 'spares' (as well as NXTs built into the King & Queen), so that ends up with 38 separate NXTs that must be controlled, commanded, and communicated with. Ron McRae did the bulk of the software work on the PC end for this, and it realy works well. The board has squares based on the large LEGO baseplates, making the entire assembly roughly 12' on a side. On top of that is a way to input the humans moves, and a laptop running chess software and helping make everything move smoothly. Even the pieces can be changed out if one starts having battery issues, and they can be easily modified with different "bodies" so the robot "bases" underneath are really interchangable (the "body" designs were done primarily by John Brost, who managed to make some truely iconic designs out of a minimum of parts). Really, I could talk about it a lot... but a descent video beats my ramblings hands-down:

Unknown said…
Getting the software components working correctly and collaborating on such a level of complexity must have been quite some challenge.

One can hardly imagine the amount of work this miracle required.

Shep said…
How did they get all the bots to communicate? I assume that the computer controlled all of the pieces and told them where to go, but how did it communicate with each individually?
Jun 12, 2010, 11:57:00 PM

Brian Davis said…
Matthias: yes, getting the SW (and the "wetware", the people involved) all working together was a major issue. Hopefully we'll be able to put more about that on Steve's website (right now it's kind of full-steam-ahead for Brickworld).

Brian Davis said…
Eric: yes. It figures out what pieces to move out of the way, and does that first, before moving the knight, and then replacing the moved pieces.
Jun 13, 2010, 4:31:00 AM

Eric said…
I guess if I'd watched the video, I'd have worked that out myself!

Are there any photos of the base robots? They look remarkably sturdy.

Brian Davis said…
I should also add that from the beginning, this was planned to be portable (well, as portable as possible, given the size). So the board can come apart into baseplates, and the robot bases can be uncoupled from the bodies (or mosaics) and stacked cleanly.
Jun 14, 2010, 10:59:00 AM

Unknown said…
Brian, so you will bring it along to LEGOWORLD in October? ;)