Hardwiring your NXTs... with LEGO

As I posted about a while ago, I've been interested in making a quadruped robot with animal-like motions. I started working on different designs earlier this summer, but haven't been able to get something that works because of the sheer number of motors involved and the expense of TETRIX parts. (i.e. about $80 for a single rotation sensor!). However, while I was working on robot prototypes, I ran into an interesting problem with NXT-NXT communications. In one of my designs I wanted to use three NXT bricks which would all need to communicate with each other. But RobotC, the programming language I was using, only supports Bluetooth communication between two NXTs.

To get around this problem, I looked into ways to hardwire the NXTs together; there are some pretty amazing homebrew solutions out there that various people have come up with. However, as I lack the technical/electronics skills required to make such devices, I looked for a way to do it purely with NXT pieces. I came up with an interesting two-way serial communications cable that simply uses two light sensors to send and recieve data. 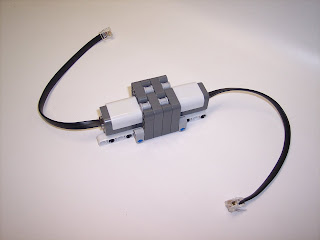 The two sensors are connected facing each other with a shield around them to block out ambient light. Each sensor is connected to a different NXT. One NXT sends data to the other by blinking its light sensor on and off, which the other light sensor picks up. The key advantage I found was that these blinks can be picked up over very short intervals of time (~30 milliseconds). This makes simple communications quite fast - perhaps faster than Bluetooth.

Here's a video demonstrating the "LightComm" cable. One NXT sends the position and power level for the motor to the other NXT, and then both NXTs move their motors accordingly. In the video, the NXT beeps when it starts sending each message, to give you an idea of the speed of the communication link. In the last part, I opened the casing around the light sensors so you can see the blinks.

One advantage of this cable is that you can customize the method of communication to be the most efficient for each application. One method would be to have the light blink on and off like a digital link to send "bits" of information. In the above video, I used an analog method, where the data is sent by the time duration of each blink. The light blinks a total of two times. The first blink gives the target position of the motor, and the second gives the power level. Amazingly, the recieving light sensor can accurately measure the duration of the light to milliseconds! Thus, each millisecond in the duration of the blink represents a degree in the target position or a unit of power. As you can see in the video, the message is usually transmitted with an accuracy of about +/- 2 degrees, which should be ample for most applications.

Shep said…
I am currently doing it with 6 NXTs on my MARVIN robot. I am having lots of luck.

Here is a photo and description

L3G0Bots Lady (;-p) - V.G. said…
Cool! I'll have to try it. I had a little simpler problem where I wanted to use 4 motors - 2 worked independent of each other & 2 worked together (of course, I could have just used a 3rd motor with 1 axle, but I didn't like the design). So I connected the 2 motors with 2 conversion cables & a 3rd conversion cable connecting them to output A; actually, one could have motor than 2 motors connected to 1 output. In programming all motors are moving simultaneously. However, with this set-up one has to use Unlimited with a Wait for Time OR seconds to control the rotations.
Jul 25, 2010, 3:59:00 AM

Brian Davis said…
It's sometimes interesting seeing what techniques get used. This one for instance has been in use since the early days of the RCX... but it's evidently still new to a lot of folks. I have to remember that. So while we're at it...

...you can also do this (under certain environments) with the NXT beeping and detecting it with a sound sensor (useful to save a port for "one way" communication). Or physically linking two motors together (requires two motor ports, but fun to watch). Or using a motor and a rotation sensor (one-way again).

I've not tried it the way described here actually - I've always gone for a "digital" solution, as sending messages is then much less time-dependent, faster, and can be self-correcting (look up self-correcting codes). An analog solution like this is interesting, and I wonder if you could take it further - use NXT 2.0 color sensors, so you have three possible colors as well as on/off states.
Jul 25, 2010, 5:50:00 AM

NickNackGus said…
As interesting and useful as this is, you are aware that you could connect a motor multiplexor to a sensor port, and wire it directly to the NXT battery using aluminum foil, or wires from any child's electronics kit, or from RadioShack, right? http://www.mindsensors.com/ offers some inexpensive multiplexors, and I haven't had much trouble connecting them to my RCX-style LEGO motors. OK, it isn't exactly free, but it cost less than the TETRIX version, and is accepted by more programming languages.

Of course, you could connect your NXTs using port 4 in high-speed mode using a standard NXT cable. I tried this using someone else’s source code, but didn’t get to do anything with it yet.
Jul 26, 2010, 9:31:00 AM

Yes, I was aware of the Motor Multiplexers, but they're so expensive that I wanted a different method.

Eric D. Burdo said…
Shep - I was going to post a comment about your 6 way "light communications"... and then I see you beat me to it. :)