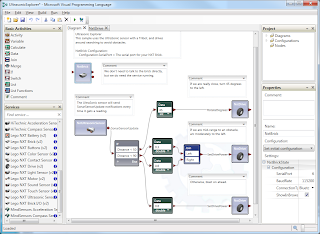 Received the information from John O. of Microsoft - I'm including the entire thing here, un-edited, for those interested in Microsoft's Robotics Developer Studio.

Full Disclosure – I am an employee of Microsoft Corporation with an interest in robotics and also am a big fan of Lego Mindstorms and Lego Technics and am patiently waiting for my two young boys to get a bit older so they can discover the fun of building with Lego Technics.

You may have heard that Microsoft has a robotics systems of their own which is now free to download and use at http://www.microsoft.com/robotics

You may have also heard that it also comes with a simulator so that you can simulate robotics in many different simulated environments such as a house, factory and city. Recently we have ran competitions where contestants were required to drive a simulated Mars rover and drive a car through a simulated city whilst obeying all the rules of the road.

However did you know that since its initial release Microsoft Robotics Developer Studio has supported Lego Mindstorms? Yes its true, you can build robotic applications for your favorite Lego robot with a freely available development system from Microsoft built on .NET.

Ahaa I hear you say, I have to be a C# developer before I can use this system. I have just bought my new Lego Mindstorms kit from the Lego store and now you want me to learn a new development language?

Well actually the Microsoft Robotics Developer Studio team has made it easy to build robotics applications for Lego Mindstorms and you do not have to write a single line of code. The tool I am talking about is Visual Programming Language. With this tool you basically drag activities and services onto a page and link them together. Think of activities as commands like IF something happens and Services as talking to hardware such as a Lego Mindstorms motor for example or a compass. We have services for motors, sensors from both Lego and Hitechnic and more. In no time at all you will have built your first Lego Mindstorms robotic application using Microsoft Robotics Developer Studio and with no coding required.

However if you decide you want to get into .NET programming with C# you can look at the source code behind your new robotic application. Just rest assured that the decision is yours to either stay in the visual programming world with Microsoft VPL or delve deeper and work with the generated code.

One question we always get asked is where does my robotic program run? With many tools for writing applications for the Lego Mindstorms robot the final program is downloaded to the robot directly. Microsoft Robotics is a .NET system so requires a Windows based PC. This means your program runs on your home computer for example and talks to the Lego Mindstorms robot either over USB or Bluetooth. While some hobbyists may see this as a limitation there is actually a huge positive to the story. Let’s assume you keep working with your Lego Mindstorms robot but then start wondering what it would be like to control a larger robot that costs many thousands of dollars. Well for most of us there is no way to do this. However with Microsoft Robotics Developer Studio we even give you a simulated environment with simulated robots including a simulated Lego Mindstorms robot. So as your skills grow you can test them out on larger, more expensive robots without buying them. Microsoft Robotics Developer Studio lets your skills grow from being a hobbyist to a professional in the future world of robotics. In addition because the brain of your robot is running on a PC you can write much larger and sophisticated programs.

You can find more about Microsoft Robotics at this location and here is a screen showing what a Visual Programming Language application for Lego Mindstorms looks like.

Thanks for reading and you can learn more about Microsoft Robotics by watching this video - http://channel9.msdn.com/posts/jodonnell/Microsoft-Robotics-Developer-Studio-update-with-Trevor-Taylor/

Unknown said…
When the Microsoft Robotics Studio first came out, I ran a small project around reversioning a set of educational materials for Robotics Studio that were originally developed for a couple of Open University courses that use or optionally made use of the original Lego Mindstorms (RCX brick version).

At the time, we had problems running the simulator effectively (old slow laptops didn't take kindly to the environment at that time!), but I'm sure things are much better now...

Anyway - the materials we developed can be found here: Visual Robotics

Linus A. said…
What about the latency problems, especially regarding motor control? I assume Robotics Studio talks to the NXT via direct commands? How about motor accuracy? Was the well-known problem of overshooting solved (with the command SetOutputState)?
Jul 17, 2010, 6:52:00 AM