What do you get when you make a room-sized robotic chess set based entirely on LEGO and unveil it at a major LEGO convention?

Monster Chess went over wonderfully at Brickworld, drawing large crowds, playing multiple games, and winning acclamation & awards. It was so well-liked that LEGO requested it almost immediately... but other venues (such as Makerfaire in Detroit on 31 Jul & 1 Aug, 2010) had also already booked it. With a double-booked tour schedule, what's a Monster Chess set to do? 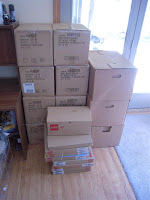 LEGO was interested enough in having it at some events that they were able to dig up parts to make a copy of this huge creation. But with less than a week, the challenge was to assemble more than 73,000 individual pieces into a single master creation: no easy feat. So when a shipping pallet with 412 pounds of LEGO arrived at Steve Hassenplug's door, he did what came naturally to him: called on his friends. Over the course of the 17 Jul weekend, more than two dozen people* participated in a mass build to restructure the random pieces into another full functional chess set. Slightly under 48 hours later, it build was done. Steve estimates it took roughly 300+ person-hours (we could have done it a little faster, but we did sleep some, and play a game of RoboRally).

The reason I wanted to blog about this wasn't becasue of Monster Chess itself actually (it's fantastic, but Steve's Monster Chess pages cov

er that much better than I can here, and they will be expanding). It's about two other aspects in the LEGO and NXT world: community, and really massive builds. Monster Chess looks impressive as all get out, but for the folks that actually produce things like this, a good bit of the "fun" is in the doing, not the finished product. Getting a bunch of people together to build a copy was an amazing amount of fun. In our case, my son Ben & I walked in about halfway through at 5 PM on Saturday, and asked what we could do - we were handed two large boxes of parts, and one of the original knight pieces, and asked to make four copies (2 white, 2 black). It was a wonderful treat, turning roughly 1300 parts (420 of them pins) into four elegant sculptures while chatting with friends... not to mention the fact that I got to race a 12-year-old

in a speed build of a model that we certainly never had a chance to build before (I won on the knights, but lost on the rooks later that weekend, so we called it a tie). About five hours later, we switched to building four copies of the rooks, which are completely different in structure and design philosophy. Where the knights are graceful, curved, complexly angled constructions, and very organic, the rooks are a sharp contrast: solid & angular, with some parts so amazingly strong and reinforced that Ben had to ask my help to drive the axles into their places, and using reinforced gearing systems to transfer the large torques needed to fire the Zamor sphere launchers built into them. For stress-relieving breaks, we would take "time out" to cover 48x48 baseplates with 2x2 tiles to make the board (with more than 570 tiles on each baseplate and an 8 by 8 board, close to 37,000 tiles had to be applied during this "speed build"). Another group of people formed an assembly line to produce the 32

identical robot bases that the "shells" sit on to make the completed pieces. 32 NXTs. Almost 100 NXT motors. More than 120 color sensors (and of course the more than 220 wires that were needed to hook all this together, and we've not even begun to talk about the actual LEGO pieces). And through this all, we had fun - talked to new people, reunited with old friends, and learned about others building styles and techniques, as well as just talking with a bunch of people that share a common passion (or obsession). 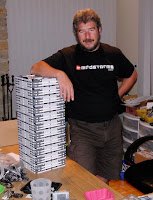 Huge multi-hundred-pound build opportunities are rare. They've got to be; most of us can't afford anything like enough LEGO to do this sort of thing. But the community aspect... that can be shared by anybody. From 7 to 70, anywhere in the world, you can usually find someone to interact with in the LEGO universe... hopefully in person, but if not, on-line. For some of us, we had to drive a significant distance to participate in this... but it was worth every last minute. If you ever get the chance to do a large build, do it... and even if you don't, find other people to form a community with out there. You won't be sorry, and will learn much more, much faster, than you may have ever dreamed of.

For more pictures of the build party, you can take a look at my Flickr page, or Brickshelf.

*To those two-dozen-plus folks: a really huge thank you, as this wouldn't have happened without all of your contributions. So let me quickly thank, in no particular order, John, Steve, Heather, Matt, Kurt, Ron, Zoe, Bryan, Kathie, Brian, Ben, Tom P., Chad, Brenda, Steven, Kate, Bunnie, Barbara, Aaron, Stacy, Tom B., Linda, Tom T., Jennifer, James, & David, and a huge thank you to LEGO for providing the parts, & shiping massive amounts of LEGO in a rapid fashion.

Joraaver Chahal said…
This looked like a lot of work, but a lot of fun as well. Wish I had been there!